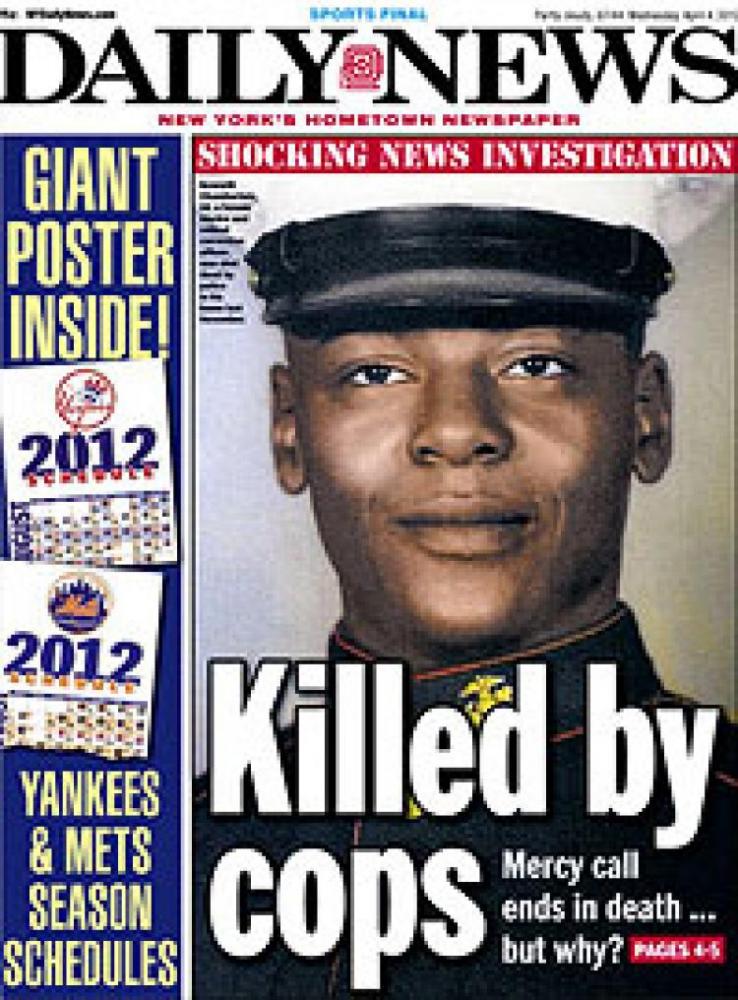 Kenneth Chamberlain, Sr. was fatally shot on November 19, 2011, in White Plains, New York. After his LifeAid medical alert was accidentally triggered, police came to his home and commanded that he open the front door to his residence. Despite his report that he did not need assistance, the police broke down Chamberlain’s door, tasered him, and then shot and killed him. Chamberlain was a 68-year-old retired Marine who had worked for the Westchester (New York) County Department of Corrections for 20 years. Due to a chronic heart condition, he was required to wear his LifeAid medical bracelet.

Rough videocam images showed Chamberlain standing in his underwear as the officers moved into his home. The video did not provide a complete account of the incident, and Chamberlain came into focus only periodically. It ended before the fatal shot was fired, but Randolph McLaughlin, one of the lawyers of Kenneth Chamberlain, Jr., stated the police failed to de-escalate the situation. After shocking him with the taser, McLaughlin stated that Chamberlain was quickly shot with bean bags, followed by two rounds fired from Officer Anthony Carelli’s gun, one that supposedly missed and one that killed him.

Allegations of racism were leveled at local law enforcement and the justice system. Both refused to thoroughly investigate the episode. In the aftermath of his death, Chamberlain’s son, Kenneth Chamberlain, Jr., discussed the irrationality of police shooting a person they were called to assist as well as the unusual delay in calling for a grand jury investigation.

The Chamberlain family’s attorney, Mayo Bartlett, charged White Plains police officials with writing reports of the incident to conceal racism, bigotry and wrongdoing by the officers. Their record of the incident overlooked that one of the officers involved, Officer Steven Hart, had used a racial slur to describe Chamberlain and the information that the initial call had been for a medical crisis. Westchester County Public Safety Commissioner David Chong said in a May 3, 2012 statement that the White Plains Police Department would conduct an internal review of the incident. He also pledged to comply with changes recommended by an independent panel reviewing the department’s policies and procedures.

On July 2, 2012, Kenneth Chamberlain, Jr., filed a civil lawsuit for $21 million against the city of White Plains and the White Plains Police Department. In November 2012, the Chamberlain family altered their lawsuit to request the city adjust police procedures to cope with individuals who are mentally disabled. In 2016, a White Plains jury found neither the city nor the police liable for Chamberlain’s death.  However, an appellate court found that the police had violated Chamberlain’s Fourth Amendment rights. The police officers involved in the shooting of Kenneth Chamberlain, Sr. were cleared of all charges against them.

In a development that anticipated the rise of the Black Lives Matter Movement in 2013, the Coalition for Police Reform–beginning in 2012–led marches, vigils, and panel discussions to draw attention to the need for civilian review boards to evaluate law enforcement agencies in the Lower Hudson Valley and improve relations between the police and the public. Kenneth Chamberlain, Jr. was one of founders of the Coalition for Police Reform.