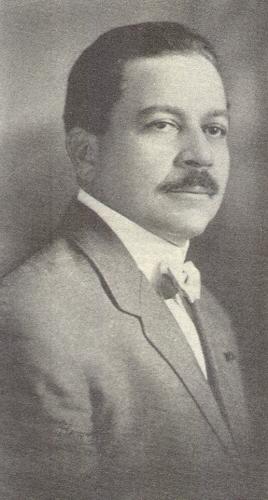 E. Burton Ceruti was a prominent attorney and one of the founders of the Los Angeles branch of the National Association for the Advancement of Colored People.  Ceruti was born on August 14, 1875, in Nassau, the Bahamas. He moved to the United States when he was four years old. Little else is known about Ceruti’s background or his childhood.

Ceruti studied at Shaw and Howard Universities and at the Brooklyn Law School. The Brooklyn Law School was not authorized to grant its own degrees until 1943. Instead, its graduates received their degrees from St. Lawrence University in Canton, New York. Ceruti thus was awarded his law degree from St. Lawrence in 1911. He then moved to California and was admitted to that state’s bar in 1912. Ceruti soon became known for his unflagging efforts to challenge discrimination against African Americans.

W. E. B. Du Bois visited Los Angeles in 1913. His visit impressed many of the city’s African American residents. Although we do not know for certain if Ceruti met Du Bois, NAACP records indicate that Ceruti took the lead in organizing a local branch of the NAACP soon after Du Bois’s visit. Ceruti was a vocal advocate of suppression of D. W. Griffith’s The Birth of a Nation. His public stand against the film attracted many new members to the NAACP. Ceruti also led the branch’s successful effort to end discrimination against African Americans by the Los Angeles County Hospital’s Training School for Nurses. In addition to his work in the field of civil rights, as an attorney Ceruti developed a reputation for his successful employment of the “insanity defense.”

Although Ceruti’s work as an attorney and his volunteer work for the NAACP kept him busy, he also belonged to a number of fraternal organizations. He served for several years as the Exalted Ruler of the Elks Lodge. He was a leader in the Knights of Pythias, and he was a charter member of the Sigma Pi Phi Fraternity.