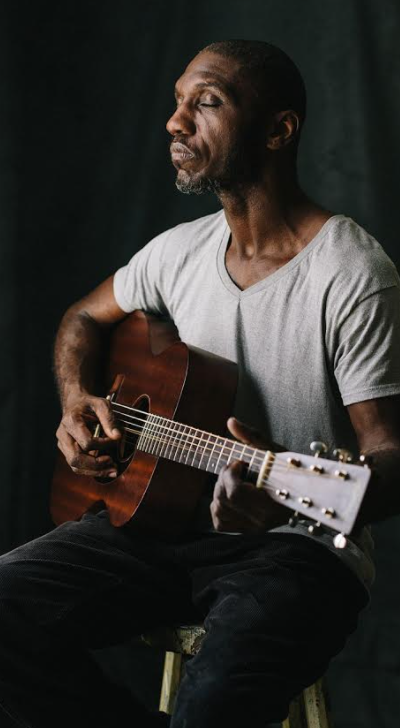 Blues percussionist, guitarist, composer, lyricist Cedric Burnside was born on August 26, 1978, in Memphis, Tennessee, to Calvin Jackson, a Blues percussionist, and Linda Burnside from Holly Springs, Mississippi, where Cedric was reared. He grew up in his grandfather’s home, the legendary North Mississippi hill country blue singer/songwriter/guitarist Robert Lee (R.L.) Burnside.  He had a younger sibling, Cody who died in 2012.

Although a child musical prodigy Burnside still had chores: chopping wood, hauling water, and help with farm work. At the age of 13, however, he began touring with his father’s band in informal entertaining establishments as a percussionist and guitarist performing raw-edged country blues. With a heavy performance schedule, Burnside left Holly Springs Junior High School after the eighth grade and was privately tutored.

In 2001, Burnside was featured in Bill Bennett’s film Tempted, the New Orleans-set thriller as himself, and the romantic comedy Big Bad Love. And in 2006, he appeared in Craig Brewer’s drama, Black Snake Moan and was featured playing drums.  That same year, he played in his uncle Garry Burnside’s band, The Burnside Exploration.

In 2002, Burnside played on Richard Johnston’s debut album, Foot Hill Stomp followed two years later by playing percussion on Johnston’s Official Bootleg #1 album.  In 2006, he collaborated with several musicians and ensembles, including his uncle Garry Burnside to create the Cedric Burnside Project that infused Mississippi Hill Country Blues, Funk, Rhythm & Blues, and Soul. He worked with Lightnin’ Malcolm, and they both toured and recorded the Juke Joint Duo album, winning Blues Music Award for ‘Best New Artist Debut’ in 2009. In 2013, Burnside won his third Memphis Blues Award as ‘Drummer of the Year.  In 2015 he was a Grammy Award Nominee for Best Blues Album for the Cedric Burnside Project’s Descendants of Hill Country and the following year for Best Blues Album. In 2018, he released the album Benton County Relic and was nominated for Best Traditional Blues Album at the 61st Annual Grammy Awards in 2019.

Burnside once again appeared in the Don Simonton and Travis Mills’ film Texas Red in 2021 regarding a Black man who was hunted by hundreds of men in frigid wintry weather of 1940 in Mississippi. His character was Texas Red.

Although he has other notable pieces including “We Made It,” “Hard to Stay Cool,” and

“The World Can Be So Cold” his 2021 song “Step In” is so far his most successful single.

Cedric Burnside is devoted to the performance, conservation, and preservation of the North Mississippi Hill Country blues. He is the father of three musical daughters, whom he taught drumming and the guitar.