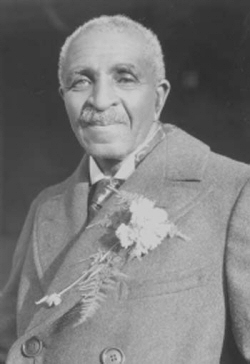 George Washington Carver began life inauspiciously on the frontier of southwestern Missouri. Born a slave, the precise date, indeed, even the year, is unknown. He never knew either of his biological parents but was raised by his former owners as if he were their own. A sickly child, his workload on the Carvers’ farm was reasonably light. Consequently, he spent much of his childhood wandering through fields and woods where he developed an affinity for the natural world. Faced with limited educational opportunities, he left Missouri for Kansas, where he graduated from high school. After a try at homesteading on the western plains of Kansas, he found his way to Iowa where he enrolled at the Iowa Agricultural College in Ames. Recruited by Booker T. Washington to head up Tuskegee’s Agricultural Department, Carver left the Midwest for Alabama’s cotton belt shortly after he became the first African American to secure an advanced degree in agricultural science.

At Tuskegee, Carver launched a campaign aimed at lifting black farmers out of the desperate poverty in which most of them lived. Though his campaign ultimately failed in its aim, Carver adapted what he had learned in Ames in such a way as to put the application of its principles within reach of impoverished tenant farmers. In so doing, he anticipated the rise of organic farming and the push for the application of “appropriate technology.” As part of his larger efforts, Carver undertook research on numerous southern crops hoping to find a plant that could undermine cotton’s stranglehold on the region. For a variety of reasons, it was his work with peanuts that catapulted him into the national limelight in the early 1920s. As an icon—the Peanut Man—he was embraced by myriad groups for disparate, sometimes antithetical, reasons.

Following his rise to fame, Carver sought to persuade southerners to find new uses for neglected natural resources and alternative ones for underutilized crops. His work with the latter made him a pioneer in the chemurgy movement, a movement that was eventually overwhelmed by the proliferation of petrochemical products. His deeply-held religious beliefs shaped his appreciation of the natural world, making him something of an environmental mystic, particularly in his later years. George Washington Carver died at Tuskegee Institute on January 5, 1943.