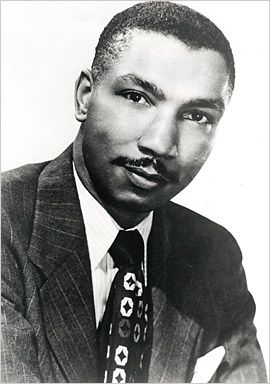 Robert L. Carter, the youngest child in a family of eight children, was born in Careyville, Florida in 1917.  His family moved north to Newark, New Jersey shortly after his birth.  Carter’s father died soon after arriving in Newark and his mother supported eight children while working as a domestic servant.

Robert Carter enrolled at Lincoln University in Pennsylvania at the age of 16 and completed his degree four years later.  In 1937 he entered Howard University Law School in Washington, D.C.  After completing his law degree at Howard, Carter earned his LLM (Master of Laws) degree at Columbia University after writing a thesis that would later define the legal strategy of the National Association for the Advancement of Colored People (NAACP) on the right to freedom of association under the first Amendment to the U.S. Constitution.

Carter was drafted into the Army in 1941 and first encountered racism.  After serving in the Army Air Corps, he was discharged from the service in 1944.  Carter was then offered a job with the NAACP’s legal staff headed by chief counsel Thurgood Marshall.  Carter accepted and became Marshall’s chief legal assistant in the fight against Jim Crow laws across the South.   Carter served, for example, as the lead attorney of the Sweatt v. Painter Texas desegregation case in 1950.

In 1950 the NAACP intensified its attack on racial segregation.  The organization needed to prove to the courts that segregation was detrimental to African American children.  Carter looked to contemporary social science research to find proof of the deleterious effects of racial segregation.  He recruited the young sociologist Kenneth Clark to join the NAACP legal team.  The NAACP used the research backing the negative effects of segregation as the backbone of their case in Brown v. The Topeka Board of Education, the 1954 ruling that declared school segregation in the United States to be unconstitutional.

In 1956 Carter succeeded Thurgood Marshall as chief counsel for the NAACP.  As chief counsel he won three other major cases: NAACP v. Alabama (1958) which assured that the identities of NAACP’s members would stay anonymous to avoid intimidation and violence against group members, Gomillion v. Lightfoot (1960) which stopped the racial gerrymandering of Tuskegee, Alabama, and NAACP v. Button (1963) which validated the right of the NAACP to challenge Jim Crow laws.

Carter continued to address the issue of education after the Brown case.  He wanted to make sure that students in predominantly black schools continued to receive a quality education.  He fought against job and housing discrimination as well.  From 1944 to 1968 (his years with the NAACP) Carter won 21 of the 22 cases he argued before the United States Supreme Court.

Robert L. Carter left the NAACP in 1968 in protest over the firing of an NAACP employee, Lewis Steele, for an article he published in the New York Times Magazine.  Carter became a partner in the law firm of Poletti, Freiden, Prashker, Feldman, and Gartner.  He was also the co-founder, with Floyd McKissick, of the National Conference of Black Lawyers.  In 1972, with a recommendation of Senator Jacob Javits, President Richard Nixon appointed Carter to as a Judge of the U.S. District Court for the Southern District of New York.

Robert L. Carter, a member of Alpha Phi Alpha Fraternity, died in New York City on January 3, 2012 from the complications of a stroke.  He was 94.