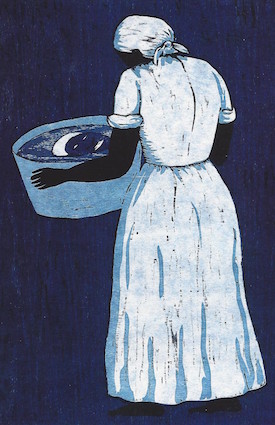 Letitia Carson was born enslaved in Kentucky sometime between 1814 and 1818. Little is known of her early life or how she got to Missouri at some point before 1845.

In May 1845, Letitia began a 6-month journey on the Oregon Trail with Irish immigrant David Carson, a 45-year old Platte County, Missouri landholder who had become an American citizen in October 1844. Whether Letitia was ever owned by David Carson is unclear.  What is clear is that by the time they began the trek to Oregon, he recognized her as a free person.  On June 9, somewhere near the crossing of the South Platte River, where the Oregon Trail begins, Letitia gave birth to the couple’s first child, Martha.

Soon after arriving in Oregon, the family of three settled into a cabin they built on David’s 640-acre Soap Creek Valley land claim. Son Adam was born in 1849. The next year Oregon officials reduced Carson’s claim to 320 acres, stating that because black people were ineligible to make an Oregon land claim. They also determined that the Carsons’ marriage was not legal.

In September 1852, David died after a short illness, leaving Letitia and their two children behind. A wealthy white neighbor, Greenberry Smith, became executor of the estate and declared that, as slaves, Letitia and the children were themselves property and could not be heirs to the estate.

Despite her unclear legal status, Letitia Carson sued Smith twice in an effort to recover an equitable portion of David’s estate for herself and her children.  She won both suits, but her victories were barely acknowledged in the territorial press at that time. During the second trial, Letitia Carson and the children left their Soap Creek Valley home and moved to upper Cow Creek Valley in Douglas County. There she served as a midwife.

In 1859, Oregon became a state and adopted its 1857 Constitution which formally banned blacks from migrating there.  The constitution also reiterated the ban on black property ownership, voting rights, and the right to sue in court to blacks residing in the state.

In May 1862, U.S. President Abraham Lincoln signed the Homestead Act into law.  That law did not bar would be homesteaders by race, and on June 17, 1863, Letitia Carson filed a Homestead Act claim for 160 acres on South Myrtle Creek in Douglas County, Oregon. She filed as a “widow” and mother of two children.  Although the act included “freed slaves,” Letitia did not identify herself as such.  On October 1, 1869, Letitia Carson’s Homestead claim was certified by President Ulysses S. Grant; it was one of the first 71 homestead claims–of 1.6 million total–ever certified in the United States.

Letitia Carson lived another 20 years on her homestead, which included a two-story house, a barn, smokehouse, cattle, pigs, and an orchard of over 100 fruit trees.  In 1888, Carson died and was buried a few miles from her homesteaded property in a pioneer cemetery.