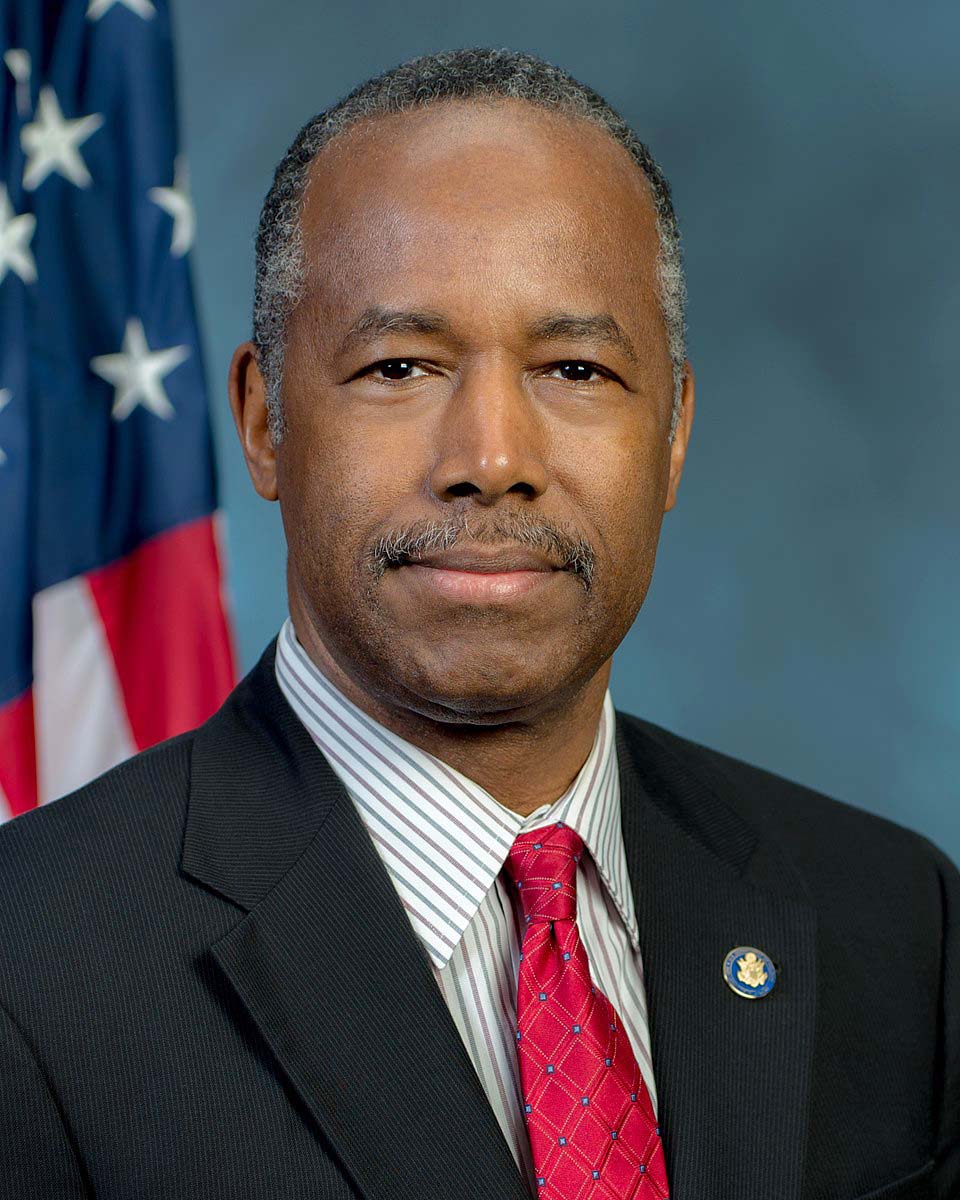 Benjamin S. Carson, neurosurgeon and Republican Presidential Candidate in 2016, was born on September 18, 1951 in Detroit, Michigan.  Carson was raised in a single parent home when his father deserted the family in 1959 when he was eight years old, leaving his mother, Sonya, and his older brother, Curtis.  Because of the turmoil in the family, Carson and his brother fell behind in school and he was labeled a “dummy” by his classmates in fifth grade.  Once his mother saw their failing grades, she stepped in to turn their lives around.  They were only allowed to watch two or three television programs a week and were required to read two books per week and write a book report for her despite her own limited reading skills. Carson developed a love for books and scholarship and eventually graduated third in his high school class.  He enrolled in and graduated from Yale University and from there completed medical school at the University of Michigan after training to become a neurosurgeon.

Benjamin Carson joined the medical staff at Johns Hopkins Hospital in Baltimore, Maryland.  In 1985 he revived a little used surgical procedure, the hemispherectomy, which involved removing half the brain of a child who had experienced numerous seizures.  This procedure had been stopped in the 1970s after hundreds of failed attempts.  Dr. Carson, however, was able to complete it successfully.  He made medical history again in 1987 when he led a team of 140 surgeons and nurses in a 22 hour surgery that successfully separated Siamese twins who were conjoined at the back of the head.  Until then, either one or both twins died during or after the complicated surgery.  Dr. Carson can also be credited with performing the first intrauterine surgical procedure to relieve pressure on the brain of a fetal twin.

Carson sets aside at least one hour a month to speak to children around the nation to encourage them to excel in school and never stop dreaming.  He has also written numerous books including Gifted Hands and Think Big. Carson retired as the director of Pediatric Neurosurgery at Johns Hopkins Hospital in Maryland in 2013.

Carson made his way onto the political scene when he gave a speech at the 2013 National Prayer Breakfast and criticized President Barack Obama who was seated two chairs away.  His publicized speech won him much favor among conservatives for his social and political views.  On May 4, 2015, Carson announced his bid on the Republican ticket for the 2016 Presidential election at a rally in his hometown of Detroit.  As a candidate, he stirred up a storm of controversy over his remarks on Islam, healthcare, gun violence, terrorism, and immigration that rapidly increased his numbers in the polls.  However, when Carson admitted to the public that he never applied to West Point despite his claim in his autobiography that he received a full scholarship to the military academy, questions surfaced regarding his credibility. In addition to this, his ideas that the Egyptian pyramids were used for grain storage and his weakness on international affairs have negatively impacted his once high ranking position in the nationals polls and as the potential Republican nominee. Early in 2016, Carson lost key voters in two battleground states (Iowa and New Hampshire) in the Republican Presidential Primary.

Ben Carson suspended his campaign on March 2, 2016. After the election of former GOP rival Donald Trump as President, the president-elect nominated Carson for the position of Secretary of Housing and Urban Development (HUD).  Dr. Carson was confirmed by the U.S. Senate on March 2, 2017 and sworn into his new cabinet post later that afternoon.  He is the only African American member of President Trump’s Cabinet.