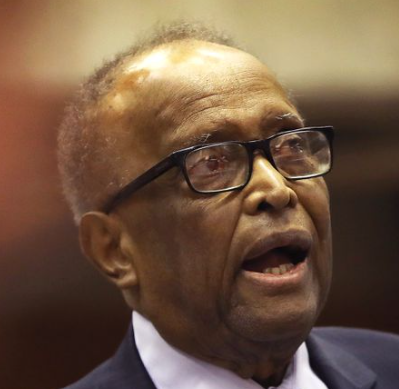 Walter Charles Carrington served as the United States Ambassador Extraordinary and Plenipotentiary to Senegal from 1980 to 1981, and to Nigeria from 1993 to 1997. He married Arese Ukpoma, a Nigerian physician, and has lived in three Nigerian cities since the late 1960s.

Carrington was born July 24, 1930 in New York City, New York to Marjorie Irene Hayes Carrington and Walter Randolph Carrington, an immigrant from Barbados. Raised in the predominantly Italian–Irish community of Everett, Massachusetts, Carrington was elected vice president of his class while at both Parlin Junior High and Everett High School. Graduating in 1948, Carrington became one of only four black students at Harvard University at the time.  He also founded the first Harvard chapter of the NAACP and, as its Youth Council delegate, visited Senegal.  He was also vice chair of the Students for Stevenson organization when Adlai Stevenson campaigned in 1952 as the Democratic candidate for President. Carrington graduated from Harvard with a Bachelor of Arts (A.B.) degree in 1952.

Entering the United States Army in 1955, Carrington served as a clerk typist in Germany. One of his assignments was with the Judge Advocate General Corps (Germany, 1955–1957).  After the service, he enrolled in Harvard Law School, earning his J.D. degree in 1958.

When Carrington was 27 years old he was appointed commissioner of the Massachusetts Commission Against Discrimination.  A year later he entered into practice and eventually became a partner with the law firm of Naples, Carrington, and Ruland. Carrington worked on the John F. Kennedy campaign for President in 1960 and from 1961 to 1971 served in the Peace Corps, eventually becoming the Peace Corps director of Africa. He then served as executive vice president of the Africa-American Institute from 1971 to 1979, and was also a member of Africare. In 1981 Carrington was named director of the Department of International Affairs at Howard University. He also taught at Marquette University in Wisconsin, Massachusetts Institute of Technology, and Washington College in Maryland.  From 1990 to 1991 Carrington served as a consultant at the Joint Center for Political and Economic Studies.

In 1993 President Bill Clinton appointed Carrington Ambassador to Nigeria, where he became noted for publicly opposing the abuses of the nation’s President, Sani Abacha. From 1997 to 1998, and again in 1999, Carrington worked as a fellow of Harvard University’s W.E.B. DuBois Institute. He was also a MacArthur Fellow in 1998. In 2004 Carrington was named the first African American Warburg Professor of International Relations at Simmons College in Boston.

In 1991 Carrington, along with Edwin Dorn, published, Africa in the Minds and Deeds of Black American Leaders.  In 2010 Carrington wrote A Duty to Speak: Refusing to Remain Silent in a Time of Tyranny, a compilation of his speeches supporting democracy and human rights in Nigeria during the Abacha military dictatorship.

Carrington was a member of Alpha Phi Alpha Fraternity and Sigma Pi Phi Fraternity. In 1997 he received an honorary doctorate (Doctor of Humane Letters) from Livingstone College in North Carolina.