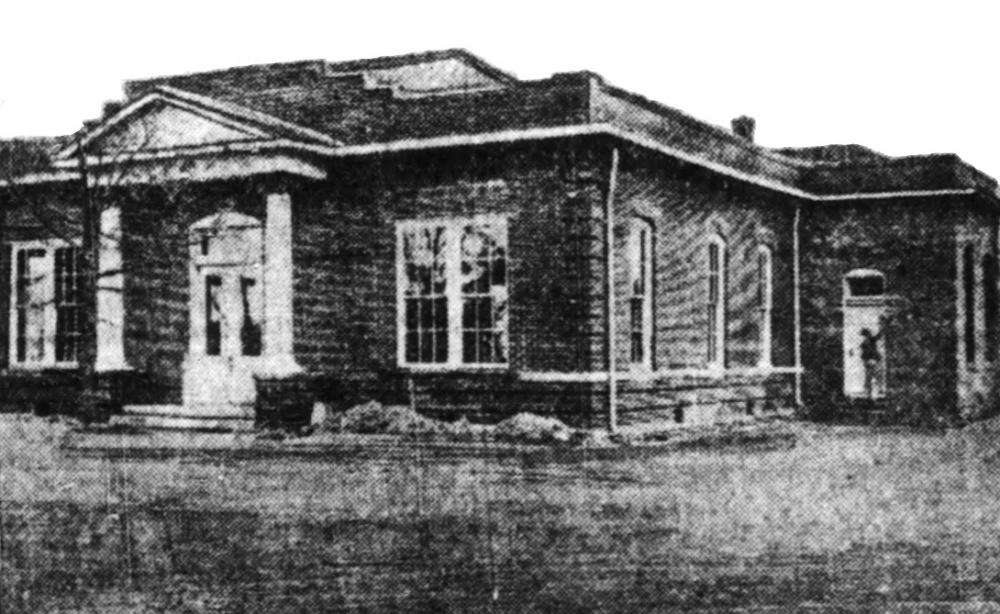 Constructed in 1910 with a grant from Andrew Carnegie’s library development program, the Carnegie Library of Mound Bayou, Mississippi was the first free public library intended for African Americans in the state of Mississippi and one of the first African American public libraries in the country. It served as both a reading room and a community assembly hall until fire destroyed it in the 1930s. Its architect, William Sidney Pittman, who would later design the segregated Carnegie branch library in Houston, Texas, is the only African American known to have designed a Carnegie library.

The library was one of Mound Bayou’s key civic developments between 1905 and 1915, a period of substantial growth that began with the opening of the Bank of Mound Bayou in 1904 and peaked with the completion of the town’s ill-fated Oil Mill and Manufacturing Company in 1912. Charles Banks, a local businessman, had helped establish both institutions. A protégé of Booker T. Washington’s, Banks was also founder of the Mississippi Negro Business League and one of Mound Bayou’s most influential citizens. He agreed with mayor B. Howard Creswell that a free public library would improve the region’s educational infrastructure. When Banks wrote his first letter to Andrew Carnegie in January 1909, the philanthropist responded just three weeks later, offering Mound Bayou $4,000 for a library. It remained the only public library grant Carnegie offered to a black town in the United States.

Mound Bayou built its one-story, red-brick library on the southwest corner of Green and Fisher streets, diagonal from the Normal and Industrial Institute. Its builder was Thomas W. Cook and its architect was William Sidney Pittman, a Tuskegee graduate and son-in-law of Booker T. Washington. However, soon after opening the library in December 1910, Mound Bayou struggled to maintain it as a public library. Though its payroll included a custodian, the library contained few furnishings and no books, only newspapers and magazines. Within a year, the town council had already neglected its financial obligation to the library. Tensions increased when Carnegie learned that the local Masonic Benefits Association was renting part of the building for its offices. The situation did not improve when a crash in cotton prices crippled the town’s industrial anchor, the Oil Mill and Manufacturing Company. State regulators closed the Bank of Mound Bayou in 1914, sending the town into further decline.

Mound Bayou’s citizens nevertheless used their Carnegie Library for a variety of community purposes, including public meetings, business league meetings, farmer’s conferences, and fundraising events. The nearby Normal and Industrial Institute and Bolivar County Training School also used the library for classes. Though a donation of 200 books boosted the library’s collections in 1912, it is unclear whether the library ever contained enough books to support the town of 1,500. In 1925, the City Federation of Women’s Clubs offered to reopen and maintain the building as a fully operational public library. But whether the town accepted their proposal is unknown. The library was lost in 1935 when a fire destroyed much of Mound Bayou’s business district. It was not rebuilt.

Aurelius P. Hood and Marshall Frady, The Negro at Mound Bayou: Being an Authentic Story of the Founding, Growth and Development of the “Most Celebrated Town in the South,” Covering a Period of Twenty-Two Years (Nashville: A.M.E. Sunday School Union, 1910); David H. Jackson Jr., A Chief Lieutenant of the Tuskegee Machine: Charles Banks of Mississippi (Gainesville: University Press of Florida, 2002); Joel Nathan Rosen, “Mound Bayou,” The Mississippi Encyclopedia (Jackson: University Press of Mississippi, 2017). Acknowledgment: This project was made possible in part by the Institute of Museum and Library Services, grant #RE-31-16-0044-16.