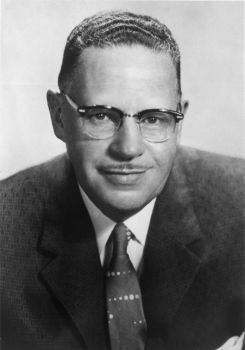 Archibald Carey Jr. followed his famous father of the same name to become a major figure in Chicago’s political and religious life during much of the 20th Century.  Over his career he was an attorney, judge, politician, minister, and bank president. Born in Chicago on February 29, 1908, to Archibald Carey, Sr., and Elizabeth Hill Davis Carey, he attended both Chicago-Kent College of Law and Northwestern University’s Garrett Biblical Institute where he earned degrees in law and theology. Between 1930 and 1941 he was pastor of the Woodland African Methodist Episcopal Church (AME) in Chicago until he moved to Quinn Chapel AME Church, the second oldest black church in the city and the place where his father had been the minister for a number of years.  Carey preached there until 1967.

Carey, a Republican, was elected an alderman from Chicago’s Third Ward and served on the Chicago City Council from 1947 to 1955. In 1952 Carey was one of the speakers at the Republican National Convention which met in Chicago.  General Dwight D. Eisenhower, who was nominated for President at that convention, appointed Carey an alternate delegate to the United Nations, a post he held from 1953 to 1956. In 1955 President Eisenhower appointed him the chairman of the President’s Committee on Government Employment Policy.  He was the first African American to chair this committee.

Through the 1950s Archibald Carey, Jr. maintained a close connection with Dr. Martin Luther King Jr. While visiting the home of Dr. King in 1956, Carey participated in the Montgomery Improvement Association’s Annual Institute on Nonviolence and Social Change. Carey was enlisted by Dr. King throughout the year long Montgomery bus boycott to raise money and public awareness in Chicago of the protest. In April 1957, Carey assisted in organizing an “Hour of Prayer” that raised $2,500 for the Montgomery Improvement Association (MIA). Carey was a member of Sigma Pi Phi and Alpha Phi Alpha Fraternities.

In 1966 Carey changed his party affiliation to Democrat. That year he was elected a Cook County circuit court judge and served in that capacity until 1978 when he retired at the age of seventy.