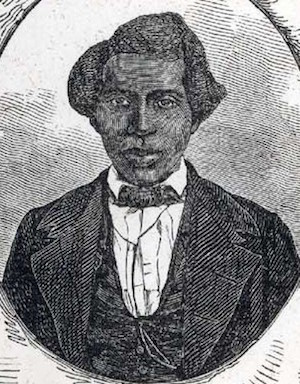 Tunis Campbell was one of the most successful black politicians in the Reconstruction Era.  Born the eighth of 10 children to free black parents, John Campbell, a blacksmith and his wife (name unknown) in Middlebrook, New Jersey on April 1, 1812, Campbell trained for missionary work at an all-white Episcopal school in Babylon, New York.  He initially worked for the American Colonization Society but eventually rejected their efforts to shore up U.S. slavery by sending only free blacks to Liberia.  He then became an anti-colonization and abolitionist lecturer.

Campbell eventually became a minister and missionary in the African Methodist Episcopal Zion Church where he organized churches in the slums of Brooklyn, New York and Jersey City, New Jersey. He continued his abolitionist work and often joined fellow abolitionist, Frederick Douglass, on speaking tours.

Between 1832 and 1845, while preaching against the evils of slavery, Campbell earned a living as a hotel steward in New York City and Boston, Massachusetts.  In 1848 he published an action plan for waiters and other hotel management tips in “Hotel Keepers, Head Waiters, and Housekeepers’ Guide,” hailed as the first book of its kind published in the United States. During his years in Boston, he married Harriet (maiden name unknown).  The couple had two biological children, a son, John Campbell, Jr. and an unnamed daughter, plus an adopted son, Edward E. Howard.

After the Emancipation Proclamation took effect on January 1, 1863, then 51-year-old Campbell was commissioned by U.S. Secretary of War Edwin Stanton to work in Port Royal, South Carolina to help resettle black refugees in the region who had been displaced by Civil War fighting.

Soon after the U.S. Congress set up the Freedman’s Bureau in March 1865, Campbell was appointed to supervise land claims and resettlement of newly freed people on five Georgia Sea Islands: Ossabaw, Delaware, Colonels, St. Catherine’s, and Sapelo.  When President Andrew Johnson later pardoned ex-Confederate landowners in the region, who then attempted to reclaim these islands, Campbell shrewdly purchased 1,250 acres in Georgia’s McIntosh County and established an association of black landowners there to divide parcels and profit from the land.

By 1868, Campbell and over 200 ex-slaves had created a fishing and farming community on St. Catherine’s Island. As the colony grew, Campbell served as its justice of the peace and political boss. Eventually a 300-strong African American militia protected the colony from reprisals by the Ku Klux Klan.

Campbell was elected to the Georgia State Senate, representing the area.  Despite bitter opposition from many conservative legislators, Campbell introduced 15 bills aimed at furthering the rights of blacks before losing his seat in an 1872 election mired in fraud and voter intimidation.

Yet he continued to serve as justice of the peace on St. Catherine’s Island. When he defended the rights of black sailors on ships docked at nearby Darien, Georgia, he was arrested, convicted, and sentenced in 1876 to one year of hard labor at a convict labor camp. Released in January 1877, Campbell moved to Washington, D.C. where he lobbied for federal protection of free-born African American rights and wrote another book, Sufferings of the Reverend T. G. Campbell and His Family in Georgia (1877).

Tunis Gulic Campbell died in Boston on December 4, 1891.  Today, the descendants of the people he led honor him within their annual “Tunis Campbell Celebrations,” in Brunswick, Georgia.