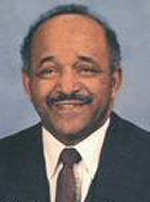 Cloves Campbell, Sr. was born in Elizabeth, Louisiana in 1931. He moved to Arizona in 1945 with his family and earned a B.A. in Education from Arizona State University. Campbell was elected to the Arizona House of Representatives in 1962, and after two terms he became the first African American to be elected to the Arizona State Senate. During his last year in the Senate, Campbell became the first legislator in the United States to introduce a bill calling for a state holiday to honor the Rev. Martin Luther King, Jr. The bill did not pass, but after two decades of struggle, Arizona approved a King holiday through a ballot measure in 1992.

Campbell’s community presence included service as a school board chairman, member of the boards of the Better Business Bureau, the Consumers Council, the YMCA Youth Center, president of the Maricopa Country, Arizona NAACP branch, and chairman of NAACP West Coast Region I. In 1969 Cloves Campbell, and his brother Charles Campbell, purchased the Arizona Informant newspaper which was founded in 1957 but had not been published for a number of years at the time of the purchase. Their newspaper was the only organ in Arizona the reports exclusively on issues of interest to the African American community. “The Informant,” as it is often called, is currently one of the longest running, and most widely circulated weeklies in Arizona history.

After losing his eyesight in 1994 from diabetes, Campbell continued to be active in the local Phoenix African American community and to manage the Informant. He died on June 19, 2004 in Phoenix at the age of 73.