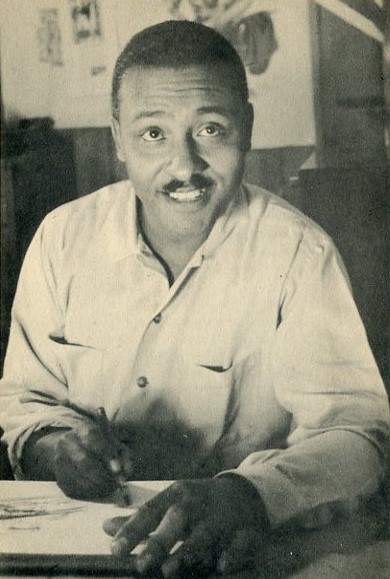 Elmer Simms Campbell was an early syndicated cartoonist and jazz critic.  Born on January 2, 1906 in St. Louis, Missouri, Campbell was the son of Elmer Cary Campbell, a high school chemistry teacher and assistant principal, and Elizabeth Simms Campbell, also a teacher. Inspired by his mother who painted in watercolor, Campbell prepared for a career in commercial art by creating cartoons for his high school’s newspaper in Chicago.  As a teenager, his work was recognized when he won a national contest for his cartoon titled “Armistice Day.”  The cartoon depicted a soldier kneeling before a comrade declaring, “We’ve Won, Buddy!” He also won other local and national cartooning competitions such as the exhibitions in Minneapolis in 1924 and 1925; a contest sponsored by the St. Louis Post Dispatch in 1928; and the Hearst Prize in 1936.  In the same year, he married his first wife, Constance Willis.

In Chicago, Campbell studied at the Lewis Institute and the Art Institute of Chicago and continued to win several prizes.  Although he worked on the staff of the humor magazine Phoenix, he also engaged in freelance work for the magazine College Comics, the Academy of Design, and the Art Students League in New York. His presence in New York during the 1920s and 1930s distinguished him as an artist of the Harlem Renaissance, confirmed by his work as illustrator of the children’s book, Popo and Fifina: Children of Haiti (1932), by poet-writers Arna Bontemps and Langston Hughes and his contributions to the National Urban League’s Opportunity: A Journal of Negro Life. He was a particularly close friend of entertainer Cab Calloway.

By the early 1930s, Campbell’s artworks had appeared in The New Yorker, Life Magazine, the NAACP’s Crisis, and the satirical magazine Judge.  He had also written gag strips for the Saturday Evening Post. It was not until 1933, ironically, that he secured long-term employment with Esquire magazine, a magazine for men, during the Great Depression.  The magazine featured his cartoons in every issue where he created the urbane, bug-eyed cartoon character named Esky that eventually became the magazine’s mascot until he left in 1958. His penchant for drawing slender, scantily dressed white women appealed to white men and opened employment pathways for assignments with Playboy, a rival men’s magazine in the 1950s. Some biographers have commented on the irony of an under-publicized African American artist acquiring special attention for his drawings of voluptuous white women at a time of increasing racial hostility towards the black male gaze where black men were punished for violating social customs of looking at or interacting with white women.

Campbell’s cartoons, nevertheless, were also seen in books and popular magazines such as Cosmopolitan, Red Book, Pictorial Review, Ebony, and Colliers. He created images for The Negro Caravan (1941) edited by Sterling Brown and We Who Die & Other Poems (1943) by Henry Binga Dismond. From 1940 to 1971, King Features Syndicate distributed his cartoons to 145 newspapers nationwide.

Campbell lived with his family in Switzerland from 1957 to 1970 after he divorced his wife and married her sister Virginia Wills. He died from cancer on January 27, 1971 in White Plains, New York leaving behind a daughter, Elizabeth Ann Parks, wife of photographer Gordon Parks. Because of Campbell’s storied career, he received honorary degrees from Lincoln and Wilberforce Universities and was inducted posthumously into the Society of Illustrators Hall of Fame in 2002.