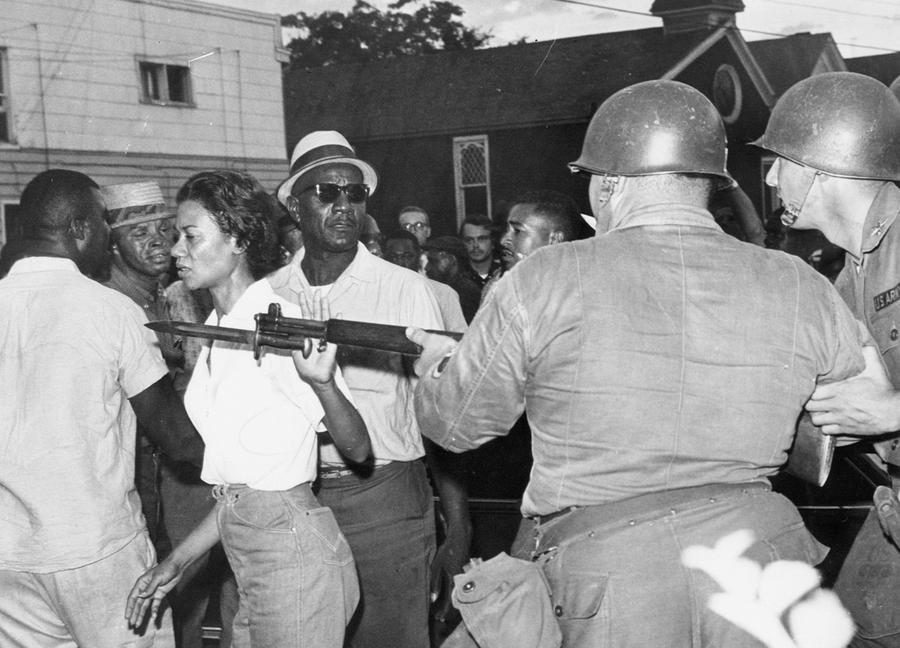 The 1963 Cambridge Riot was the result of racial tensions between African American and white residents in the town of Cambridge, Maryland. After a year of demonstrations led by Baltimore’s Civic Interest Group (CIG) to desegregate Maryland’s Eastern shore, many African Americans in Cambridge became discontented with relying on non-violence to combat segregation. Their militant approach was met with more violations of their civil rights, which led to the beginning of the uprising that lasted from June 11 to June 14.

The Cambridge Nonviolent Action Committee (CNAC) was founded in 1962 to continue the movement of protests triggered by CIG. By the end of the summer, protests led by the organization began to slow down as many of the student members returned to the classrooms.

In March 1963, Gloria Richardson became the leader of the CNAC and demonstrations were rekindled, focusing on a local movie theater that forced blacks to sit in the back rows of the balcony. Shortly after, leaders from CNAC and CIG met with city officials to discuss this and other examples of the violations of civil rights of local black residents. After their demands went unheard, Richardson led a protest where she and 16 other protesters were arrested for “disorderly conduct.”

In her absence, Dwight Cromwell and Dinez White, both 15-year-old high school students, took over leadership of the protests until they were arrested in May for praying outside of a segregated facility. Both young men were held without bail and later sentenced to indefinite incarceration in the state juvenile facility.

After their arrests many in the African American community repudiated the non-violent tactics of previous protests and declared they would embrace armed self-defense. Large marches were organized for the nights of June 11 and June 12 to protest the harsh sentencing of Cromwell and White. On both evenings, protesters were met by white mobs. Witnesses say Maryland State Troopers were present, but their efforts went towards protecting the mobs.

On June 13, 1963, the CNAC organized another protest in downtown Cambridge, but this time, armed African-American men circled the demonstrators to protect them. The following night of June 14, fights broke out between African Americans and whites. The violence escalated to exchanges of gunfire, leaving multiple people wounded. White businesses within the Second Ward, a predominantly African American area of town, were set on fire. Police attempted to respond to the violence but were driven back, as protesters hurled rocks at their vehicles and fired weapons into the air.

Governor Milliard J. Tawes offered a plan of gradual desegregation in Cambridge in exchange for the CNAC withholding protests for a year. The CNAC declined the offer and Gov. Tawes declared martial law, deploying the National Guard to Cambridge for 25 days.

The violence between African Americans and whites continued throughout the summer of 1963 throughout Cambridge. In July, Gov. Tawes sent the National Guard back in for a period of two years, the longest occupation of any American community since the Civil War. Activists who were found responsible for protests during the occupation were sent to the Pikesville, Maryland Armory for “protective custody.”