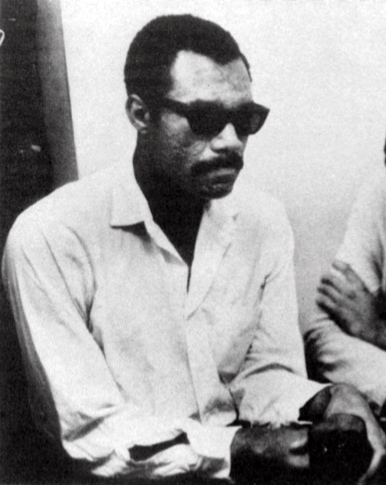 Calvin Coolidge Hernton, poet, author, teacher, mentor, and literary critic was born April 28, 1932, in Chattanooga, Tennessee to Virgil and Magnolia Jackson Hernton. Hernton is best known for his seminal work Sex and Racism in America, which gives a bold historical and sociological analysis of how slavery and interracial sex affected relations between African Americans and white Americans.

Hernton entered Talladega College in 1950. In 1952, Hernton began spending his summers in New York to be closer to the burgeoning arts movement where he met Langston Hughes. Hughes became Hernton‘s mentor. In 1954, Phylon published Hernton’s first poem “Remigrant.” Hernton studied Sociology at Fisk University and graduated in 1956. His M.A. thesis analyzed letters and editorials written to newspaper editors about the Montgomery Bus Boycott.

Having completed his M.A. degree, Hernton took short-term teaching positions at several black colleges in the South before returning to New York in 1961 to pursue a doctorate in Sociology at Columbia University. While at Columbia he realized that his passion was writing. He first showcased his talents as a poet at Les Deux Megots coffeehouse in New York. In 1962, Hernton and Tom Dent co-founded The Umbra Workshop with a group of fellow poets and aspiring literary figures. In 1963, the group established the literary magazine Umbra.

In 1965, Hernton’s most important work, Sex and Racism in America first appeared. In it, Hernton argued that hierarchies of sexual dominance established during the period of slavery had created a latent sexual tension that informs all interracial relations in American society even those that are purely social. Also, in 1965, Hernton moved to London to study with psychiatrist R.D. Laing at the London Institute of Phenomenological Studies, and in 1968, he took part in the Antiuniversity of London alongside radicals Obi Egbuna and C.L.R. James. He returned to the United States in 1969 and was a poet in residence for a year at Central State University before becoming a writer-in-residence at Oberlin College in 1970.

At Oberlin, Hernton’s career flowered. In 1971, he published Coming Together: Black Power, White Hatred, and Sexual Hangups, and in 1973, Oberlin named him professor of Black Studies and Creative Writing. Hernton taught courses in African, African American, and Caribbean literature. In 1980, Hernton became Chair of the Department of African American Studies at Oberlin. Hernton was also a mentor to many students at Oberlin including future movie star and television star Avery Brooks. In 1989, at Brooks’s request, Hernton became a scriptwriter for the television sitcom A Man Called Hawk.

In 1987, Doubleday published Hernton’s acclaimed Sexual Mountains and Black Women Writers: Adventures in Sex, Literature, and Real Life. In it, Hernton explored the twin mountains of sex and race and their meaning in the lives and work of African American women writers. Cancer forced Hernton to retire in 1999. Shortly before his death, he took part in a major conference on Hip Hop at Oberlin College, the final significant professional activity of his long and distinguished career.

Hernton married Mildred Webster, a former classmate from Talladega, in 1958, and they had one son, Antone. His marriage to Webster ended in a divorce, and later in life he married Mary Garvey O’Callaghan.