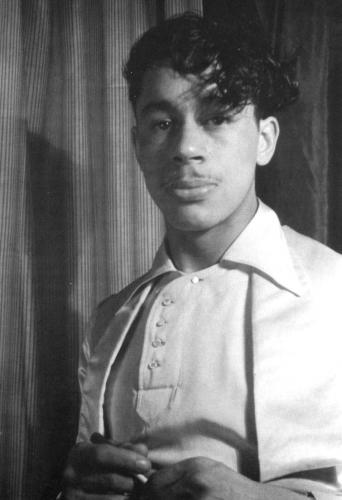 Calloway Jr. and Martha Eulalia Reed in Rochester, New York. Calloway was raised in Baltimore, Maryland and in high school he sung with a group called the Baltimore Melody Boys.

Calloway attended Crane College in Chicago for pre-law but soon abandoned his studies for a career in the music industry, following the path of his sister, Blanche, an established singer. He started out performing for various Chicago night clubs, eventually securing a spot as a drummer and singer at the Sunset Club, a popular jazz venue in Chicago’s South Side. While working at the Sunset, Calloway earned the reputation of being a charismatic, lively performer and in 1928 served as the club’s master of ceremonies. One year later he led the house band, the Alabamians.

In 1929 Calloway and the Alabamians went on tour to New York City’s Harlem and while his band did not meet with much success, Calloway was immediately recognized for his talent as a bandleader.  He became band leader for the Missourians, renamed Cab Calloway and His Orchestra at the prestigious Savoy Ballroom. In 1931 his band replaced Duke Ellington at Harlem’s famous Cotton Club. The song for which his band is most well known is Minnie the Moocher (1931). The song, with its call-and-response chorus of “Hi-de-hi-de-hi-de-hi, Ho-de-ho-de-ho-de-ho,” is one of the most well known examples of scat singing, the popular jazz technique of singing improvised nonsense words that Calloway helped make famous. The band grew in popularity in 1932 after Minnie the Moocher was featured in both the film The Big Broadcast as well as in a Betty Boop cartoon, Minnie and the Moocher.

Calloway’s success as a performer was due in part to his energetic onstage personality. Known for his frenzied movements, signature white tuxedo and tails, and audience sing-alongs, Calloway soon became a household name of the 1930s. His Cotton Club radio broadcasts and radio appearances with Bing Crosby made him one of the wealthiest performers during the Depression era.

In 1935 Calloway and His Orchestra became one of the first black jazz bands to tour Europe. Prominent black musicians who played for Calloway include trumpeter Dizzy Gillespie and saxophonist Leon “Chu” Berry. Calloway’s Orchestra was arguably the most popular band during America’s swing era of the 1930s and 1940s. However, after World War II the public began to favor small bebop combos over large swing-style bands, and Calloway was forced to disband his orchestra in 1948.

He remained active in the world of show business, however, singing in a 1950 revival of George Gershwin’s Porgy and Bess, acting in an all-black production of Hello Dolly! in 1967, and appearing in a cameo for the 1980 film The Blues Brothers. In 1993 President Bill Clinton awarded Calloway the National Medal of the Arts.

Calloway married the wealthy Wenonah “Betty” Conacher in 1928. In 1949 they divorced and he married Zulme “Nuffie” McNeill. They had three children. Calloway died in Hockessin, Delaware from complications following a stroke in 1994.