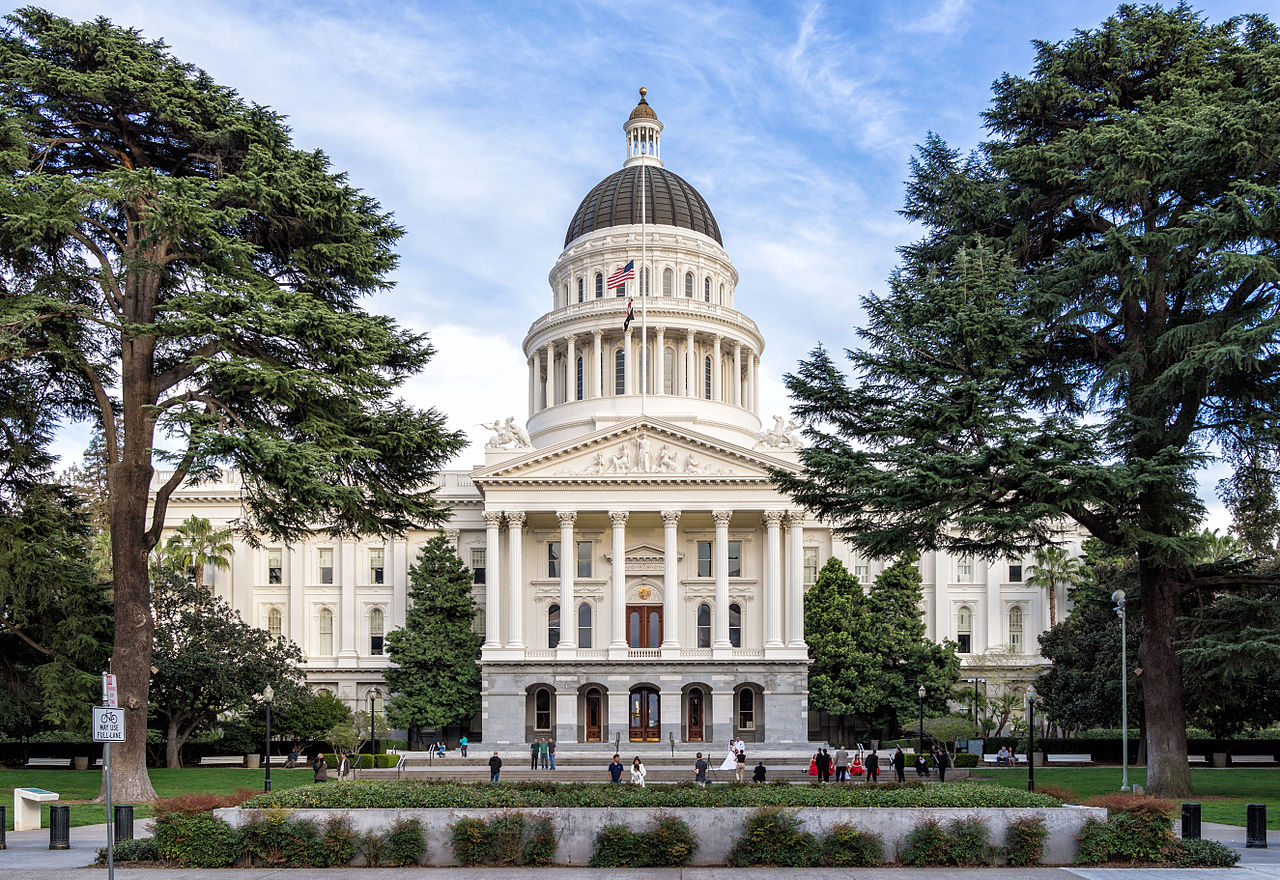 An act to add Part 4.5 (commencing with Section 1410) to Division 2 of, and to amend Section 56 of, the Labor Code, relating to prevention and elimination of practices of discrimination in employment and otherwise against persons because of race, religious creed, color, national origin, or ancestry, creating a State Commission on Fair Employment Practices, defining its functions, powers and duties, providing for the appointment and compensation of its officers and employees.

The people of the State of California do enact as follows:

1410. This part may be referred to as the “California Short title Fair Employment Practice Act.”

1411. It is hereby declared as the public policy of this State that it is necessary to protect and safeguard the right and opportunity of all persons to seek, obtain, and hold employment without discrimination or abridgement on account of race, religious creed, color, national origin, or ancestry. It is recognized that the practice of denying employment opportunity and discriminating in the terms of employment for such reasons, foments domestic strife and unrest, deprives the State of the fullest utilization of its capacities for development and advance, and substantially and adversely affects the interests of employees, employers, and the public in general. This part shall be deemed an exercise of the police power of the State for the protection of the public welfare, prosperity, health, and peace of the people of the State of California.

1412. The opportunity to seek, obtain and hold employment without discrimination because of race, religious creed, color, national origin, or ancestry is hereby recognized as and declared to be a civil right.

1413. As used in this part:
(a) “Person” includes one or more individuals, partnerships, associations or corporations, legal representatives, trustees, trustees in bankruptcy, or receivers.
(b) “Employment agency” includes any person undertaking for compensation to procure employees or opportunities to work.
(c) “Labor organization” includes any organization which exists and is constituted for the purpose, in whole or in part, of collective bargaining or of dealing with employers concerning grievances, terms or conditions of employment, or of other mutual aid or protection.
(d) “Employer,” except as hereinafter provided, includes any person regularly employing five or more persons, or any person acting as an agent of an employer, directly or indirectly; the State or any political or civil subdivision thereof and cities.
“Employer” does not include a social club, fraternal, charitable, educational or religious association or corporation not organized for private profit. “Employer” does not include a person with respect to the person’s employmeit of agricultural workers residing on the laud where they are employed as farm workers.
(e) “Employee” does not include any individual employed by his parents, spouse or child, or in the domestic service of any person in his home; and it does not include agricultural workers residing on the land where they are employed as farm workers.
(f) “Commission,” unless a different meaning clearly appears from the context, means the State Fair Employment Practice Commission created by this part.

1415. Any member chosen to fill a vacancy occurring otherwisee than by expiration of term shall be appointed for the unexpired term of the member whom lie is to succeed. Three members of the commission shall constitute a quorum for the purpose of conducting the business thereof. The Governor shall also appoint a Chief’ of the Division of Fair Employment Practices, who shall be the principal executive officer of the commission.

1417. Any member of the commission may be removed by the Governor for inefficiency, for  neglect of duty, misconduct or malfeasance in office, after being given a written statement of the charges and an opportunity to be heard thereon.

1418. The commission shall formulate policies to effectuate purposes of this part and may  make recommendations to agencies and officers of the state and local governments in aid of such policies and purposes.

1419. The commission shall have the following functions, sonic powers and duties:
(a) To establish and maintain a principal office and such other offices within the State as the Legislature authorizes.
(b) To meet and function at any place within the State.
(c) To appoint an attorney, and such clerks and other employees as it may deem necessary, fix their compensation within the limitations provided by law, and prescribe their duties.
(d) To obtain upon request and utilize the services of all governmental departments and agencies.
(e) To adopt, promulgate, amend, and rescind suitable rules and regulations to carry out the provisions of this part.
(f) To receive, investigate and pass upon complaints alleging discrimination in employment because of race, religious creed, color, national origin or ancestry.
(g) To hold hearings, subpoena witnesses, compel their attendance, administer oaths, examine any person under oath and, in connection therewith, to require the production of any books or papers relating to any matter under investigation or in question before the commission.
(h) To create such advisory agencies and conciliation councils, local or otherwise, as in its judgment will aid in effectuating the purposes of this part, and may empower them to study the problems of discrimination in all or specific fields of human relationships or in specific instances of discrimination because of race, religious creed, color, national origin, or ancestry, and to foster through community effort or otherwise good will, cooperation, and conciliation among the groups and elements of the population of the State and to make recommendations to
the commission for the development of policies and procedures in general. Such advisory agencies and conciliation councils shall be composed of representative citizens, serving without pay.
(i) To issue such publications and such results of investigations and research as in its judgment will tend to promote good will and minimize or eliminate discrimination because of race, religious creed, color, national origin, or ancestry.
(j) To render annually to the Governor and biennially to the Legislature a written report of its activities and of its recommendations.

1420. It shall be an unlawful employment practice, unless based upon a bona fide occupational qualification, or, except where based upon applicable security regulations established by the United States or the State of California:
(a) For an employer, because of the race, religious creed, color, national origin, or ancestry of any person, to refuse to hire or employ him or to bar or to discharge from employment such person, or to discriminate against such person in compensation or in terms, conditions or privileges of employment.
(b) For a labor organization, because of the race, religious creed, color, national origin, or ancestry of any person, to exclude, expel or restrict from its membership such person, or to provide only second-class or segregated membership or to discriminate in any way against any of its members or against any employer or against any person employed by an employer.
(c) For any employer or employment agency to print or circulate or cause to be printed or circulated any publication, or to use any form of application for employment or to make any inquiry in connection with prospective employment, which expresses, directly or indirectly, any limitation, specification or discrimination as to race, religious creed, color, national origin, or ancestry or any intent to make any such limitation, specification or discrimination.
(d) For any employer, labor organization or employment agency to discharge, expel or otherwise discriminate against any person because he has opposed any practices forbidden under this act or because he has filed a complaint, testified or assisted in any proceeding under this part.
(e) For any person to aid, abet, incite, compel, or coerce the doing of any of the acts forbidden under this part, or to attempt to do so.

1423. After the filing of any accusation, an investigation shall be made and an attempt to eliminate such practice shall be made as provided in Section 1421 unless such attempt has previously been made. In case of failure to eliminate such practice, or in advance thereof if in the judgment of the commissioner making time investigation, circumstances warrant, the latter shall cause to be issued and served in the name of the commission, a written accusation, together with a copy of such complaint, as the same may have been amended, requiring the person, employer, labor organization or employment agency named in such accusation, hereinafter referred to as “respondent,” to answer the charges of such accusation at a hearing.

1424. Hearings held under the provision of this part shall be conducted, as nearly as practicable, in accordance with the Administrative Procedure Act, Chapter 5 (commencing with Section 11500) of Part 1, Division 3, Title 2 of the Govermnent Code, and the commission shall have all the powers granted therein.

1427. The commission shall establish rules of practice not inconsistent with law to govern the foregoing procedure and its own actions thereunder.

1428. Every final order or decision of the commission is subject to judicial review in accordance with law.

1429. Whenever the commission believes, on the basis of evidence presented to it, that any person is violating or is about to violate any final order or decision issued by it pursuant to this part, the commission may bring an action in the Superior Court of the State of California against such person to enjoin him from continuing the violation or engaging therein or in doing anything in furtherance thereof. In such action an order or judgment may be entered awarding such temporary restraining order or such preliminary or final injunction as may be proper.

1430. Any person who shall willfully resist, prevent, impede or interfere with any member of the commission or any of its agents or agencies in the performance of duties pursuant to this part, or who shall in any manner willfully violate an order of the commission, shall be guilty of a misdemeanor, punishable by imprisonment in a county jail, not exceeding six (6) months, or by a fine not exceeding five hundred dollars ($500), or both.

1431. The provisions of this part shall be construed liberally for the accomplishment of the purposes thereof. Nothing contained in this act shall be deemed to repeal any of the provisions of the Civil Rights Law or of any other law of this State relating to discrimination because of race, religious creed, color, national origin or ancestry. Nothing contained in this act shall be deemed to repeal or affect the provisions of any ordinance relating to such discrimination in effect in any city, city and county, or county at the time this act becomes effective, insofar as proceedings theretofore commenced under such ordinance or ordinances remain pending and undetermined. The respective administrative bodies then vested with the power and authority to enforce such ordinance or ordinances shall continue to have such power and authority, with no ouster or impairment of jurisdiction, until such pending proceedings are completed, but in no event beyond one year after the effective date of this act.

1432. If any clause, sentence, paragraph, or part of this part or the application thereof to any person or circumstance, shall, for any reason, be adjudged by a Court of competent jurisdiction to be invalid, such judgment shall not affect, impair, or invalidate the remainder of this part and the application thereof to other persons or circumstances, but shall be confined in its operation to the clause, sentence, paragraph, or part thereof directly involved in the controversy in which such judgment shall have been rendered and to the person or circumstances involved.