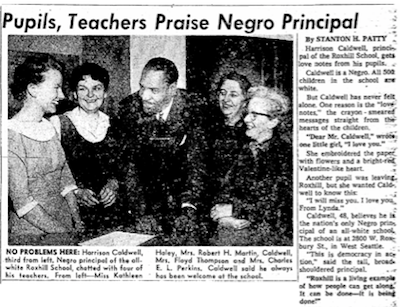 Harrison Laverne Caldwell, the first African American principal in the Seattle Public Schools District, was born in Topeka, Kansas in 1909. Very little is known about his personal life. By the time of his death, he had become one of the most important educational leaders in the states of Kansas and Washington.

Caldwell had taught for twenty-three years in Kansas, briefly worked as dean of Swift Memorial College in Rogersville, Tennessee, and was director of education for black students in Coffeyville and Topeka in the years before the landmark case Brown v. Board of Education (1954). In those years, he worked alongside others to aid desegregation efforts. In 1954, he moved to Seattle with his wife, Valeria and his son, Lynn. There, welcomed by the school district, he served as vice principal under Edgar A. Stanton at both Gatewood and Roxhill Elementary Schools in West Seattle. Two years later, upon Stanton’s retirement from Seattle Public Schools, Caldwell was nominated and confirmed by the school board as principal of Roxhill. All nine teachers and four hundred and fifty students that attended the school at that time were white.

During his tenure as principal, The Seattle Times referred to Caldwell as “The Negro Principal.” In 1957, the newspaper published an article that showcased the harmony and cooperation between Caldwell, his students, and his teachers at Roxhill. Caldwell once expressed that he never experienced any problems with race while being principal of the school and firmly believed that “Roxhill is a living example of how people can get along. It can be done-It is being done!”

While working at Roxhill, he was also a strong community leader. He was elected to the Board of Theatre Supervisors and the Y.M.C.A. He also served as a member of the Seattle Urban League, Seattle Housing Authority, Red Cross, Juvenile Protection Association, Seattle Principals’ Association, Washington Education Association, Kiwanis International, the Boy Scouts. Caldwell was named Seattle Citizen of the Year in 1957.

Caldwell’s wife, Valeria, was a teacher, too. Caldwell’s son, Lynn, a student at Garfield High School in the early 1960s eventually became a principal like his father, serving at Eckstein Middle School.

After serving at Roxhill for eight years, Harrison Caldwell died on September 3, 1964. He was 55 years old. In 2007, the students and staff of Roxhill Elementary dedicated the library of the school to the memory of Caldwell and is now named the Harrison L. Caldwell Library.