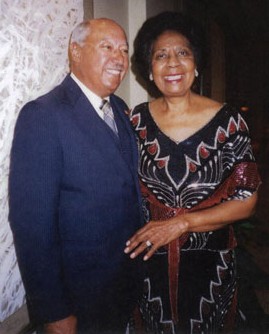 Harriet Elizabeth “Liz” Byrd is a former educator, state representative, and state senator in Wyoming.  She was born on April 20, 1926 in Cheyenne to pioneer settlers Robert C. “Buck” and Sudie Smith Rhone. Her grandfather, Charles J. Rhone, arrived in Wyoming in 1876 and worked as a cowboy and railroader near Cheyenne and Laramie.  After graduating in 1944 from Cheyenne Central High School, Harriett married James “Jim” W. Byrd in 1947, who later became the first African American police chief in Cheyenne in1966. She and her James Byrd had three children before he passed away in 2005.

Byrd received a B.A. degree in education in 1949 from Western Virginia State College and a M.A. in education from the University of Wyoming in 1976. Although she had a degree in 1949 she was not allowed to teach in the Laramie County School District because of her race and instead taught at the nearby F.E. Warren Air Force Base for ten years.  In 1959 she was finally hired by the Laramie County School District and taught elementary school for 27 years in Cheyenne.

In 1980 Harriett Byrd was the first African American elected to the Wyoming legislature, representing District 44. Byrd served eight years as a state Representative and was elected a state Senator in 1988 where she served four years. She worked tirelessly for more than a decade sponsoring legislation to establish a state holiday in honor of Dr. Martin Luther King Jr.’s birthday.  Her bill was finally passed in 1991, however, the Legislature called it Martin Luther King, Jr./Wyoming Equality Day.  Nonetheless, many Wyoming residents celebrate the day as King Day.

A recipient of a number of awards and honors, one of the most notable is sharing the pages with Oprah Winfrey, Rosa Parks and other African American women of accomplishment in the I Dream a World book published in 1999.  She is also a member of a number of religious, civic, and social organizations including the National Association for the Advancement of Colored People (NAACP), National Education Association, Wyoming Education Association, the American Legion Auxiliary in Cheyenne, and Delta Sigma Theta Sorority.  She is past president of the Search Light Club, the oldest African American women’s club in Wyoming.  Elizabeth Byrd lives in Cheyenne.  Her son, James W. Byrd II, is currently a Wyoming Representative from District 44, holding her old seat.