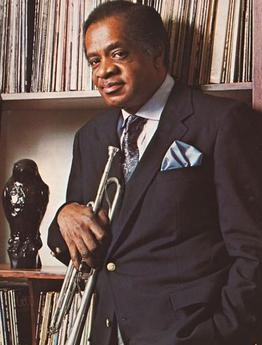 Donald Byrd (Donaldson Toussaint L’Ouverture Byrd II) was born on December 9, 1932 in Detroit, Michigan; his father was amateur musician and Methodist minister D.T. Byrd. He attended Cass Technical High School, had a stint in the US Air Force, graduated from Wayne State University, and then earned his master’s in music education at the Manhattan School of Music. Later he received a law degree from Howard University, and in 1982 earned his doctorate in education from Teachers College at Columbia University.

With a hard-driving lyrical trumpet style, Donald Byrd blew into New York’s bebop era: 23 years old, clean-living, ready to take on the music world. He did. Within a year, in 1955, he had joined Art Blakey’s Jazz Messengers, replacing the legendary late Clifford Brown. His career, based on his growing innovation and style, focused on his African American roots, and toward his own formal education. Fellow musicians considered him a born teacher, sharing and encouraging any sincere seeker. One of these was a young Herbie Hancock, who always expressed thanks for Byrd’s pointed mentoring.

Byrd joined Blue Note Records and worked with their label for 19 years. He encouraged musicians to retain the publishing rights to their own music, to enter recording contracts with bargaining, and to attain freedom in promoting creative expression.

He recorded with most of the jazz greats during the 1950s, and then toured Europe and studied with theorist Nadia Boulanger in Paris, France. Over the years Byrd led his own groups on 50 albums, and was a sideman in 97 more. Concerned with the lack of recognition and advanced education in the African American music he embodied, he started the first formal college level classes in jazz. He also developed a method in university classes he called music+math=art. Over many years Byrd taught at a dozen colleges and universities; he concluded his career as an artist-in-residence at Delaware State University, beginning in 2008. He also provided a musical scholarship in his name.

In 1973, with his keen observation of the changing musical world, he ventured into the jazz/funk/soul field with a new sound. The album Black Byrd, developed with his students at Howard University, was an instant success, selling a million copies for Blue Note. This was a direction scorned by critics who had once been his supporters, but the sound became a standard with pop and eventually hip-hop audiences. His recordings have been sampled on over 200 hip-hop songs.

In later years, Byrd’s music returned to his jazz roots, even following his long-time inspiration John Coltrane in recording spiritually-dedicated music. In 2000, the National Endowment for the Arts recognized Byrd as a Jazz Master, the nation’s highest jazz honor.

Donald Byrd died on February 4, 2013, at the age of 80; he had lived for many years in Teaneck, New Jersey. His surviving family, fans, students and fellow musicians continue to celebrate his inspiring music and his educational legacy.