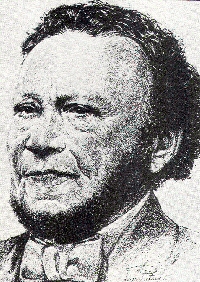 As one of the earliest permanent American settlers on Puget Sound in 1845, George Bush played a vital role in the beginnings of Washington Territory. Bush’s story is even more remarkable because he was a man of mixed race who overcame prejudice and discrimination to succeed as one of the area’s most beloved figures.

Little is known of Bush’s early life.  It is believed that his father was Mathew Bush, a West Indian who married the Irish maid of a wealthy Quaker family in Pennsylvania. George Bush married Isabella James, a white American of German ancestry, on July 4, 1831, in St. Louis, Missouri.  They became the parents of nine sons, six of whom survived to adulthood.

Facing prejudice in the slave state of Missouri and hoping for a better future for their sons, the family joined the westward migration to the Oregon country in 1844 with their friends and neighbors.  Several months later, when they reached The Dalles on the lower Columbia River, they learned that the Oregon Provisional Government had passed a Black Exclusion Law. The Bush family and his neighbors did not go to the Rogue River Valley as originally intended but settled instead at Fort Vancouver, on the north side of the Columbia River in what is now Washington. The exclusion law, coupled with the desire of the settlers to secure an American foothold north of the Columbia, persuaded Bush and his party to move north to Puget Sound since enforcement of this law was limited to American settlements south of the Columbia.

The five families and six single men now known as the Simmons Party, after Michael Simmons, who had accompanied Bush on the Oregon Trail and who was named the leader of the group as it moved north, arrived at the Deschutes River falls in October, 1845 and established “New Market,” the first permanent American settlement on the Puget Sound.  The name was later changed to Tumwater, and the area became a part of the United States when the boundary line with Great Britain was settled in 1846. Tumwater is south of and adjacent to Olympia, the state capital of Washington.

Bush built the first grist mill and saw mill in 1846 and 1847.  He also quickly established a fine farm on the prairie south of the Deschutes Falls.  Their right to the homestead was challenged in 1850 when the Donation Land Claim Act provided free land exclusively to white settlers.  A petition signed by fifty-five members of the first Territorial Legislature in 1854, and an Act of Congress the following year, allowed Bush and his wife the right to own their land.  Bush, however, was not allowed to vote.  George Bush died in 1863 at the age of 74, and was followed by his wife, Isabella, in 1866.