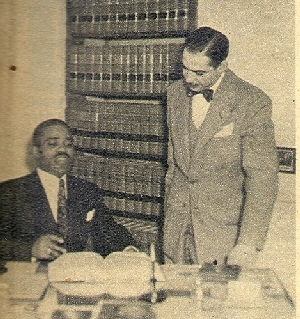 Philip Burton was a Seattle lawyer for more than 40 years, a voice for the disadvantaged, and a fighter for reforms to end discrimination in education, housing and employment.  His legal actions led to the desegregation of Seattle Public Schools.  Fighting for civil rights was his lifelong activity and began in the late 1940s when, as a law student at Washburn School of Law, he brought suit against the City of Topeka for discrimination in the city-owned movie theaters and public swimming pools.  He worked on the initial filing of the landmark Brown v. Board of Education case in Topeka which was eventually argued before the U.S. Supreme Court.  The ruling abolished segregation in public schools.

Philip Burton moved to Seattle in 1948, and started a law practice which lasted until his retirement in 1990.  For 45 years he served on the board of the Seattle Branch of the National Association for the Advancement of Colored People (NAACP) which addressed many housing, employment and school issues.  In 1962, as the association’s attorney, he brought a lawsuit against the Seattle School District to end public school segregation, which prompted the School Board in 1963 to initiate a voluntary student transfer program.  In 1967, he helped win passage of the state’s Fair Housing Act which barred discrimination in real estate transactions.  In 1977 he threatened a lawsuit against the Seattle School District which spurred the adoption of a mandatory school desegregation program.