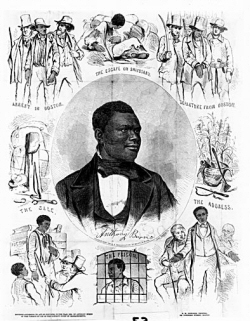 The youngest of thirteen children, Anthony Burns was born into slavery in Virginia on May 31, 1834. His family was owned by John Suttle. His mother married three times. Burns’s father was her third husband, but he died when Anthony was very young.

After John Suttle died, financial problems prompted his widow to sell five of the Burns siblings. For additional income, she also hired out the remaining siblings, including Anthony. Burns performed a variety of jobs, including personal servant, sawmill worker and tavern employee. He was also given the responsibility of managing four other slaves owned by Mrs. Suttle; he was allowed this freedom as long as he paid his master a fee from his earnings.

In March 1854, Burns escaped Virginia and boarded a ship to Boston. When he arrived in Boston, he found employment with a clothing store operated by Lewis Hayden, an abolitionist.

His freedom was short-lived, however. On May 24, 1854, Burns was arrested under the Fugitive Slave Act, a part of the Compromise of 1850. This controversial federal law allowed slaveholders to reclaim fugitives by presenting an affidavit of ownership and even required citizens to assist law enforcement with recapture.

Black and white Boston abolitionists who opposed the Fugitive Slave Act seized upon the Burns arrest as a way to demonstrate their disapproval of the federal statute.  On May 26, 1854, Lewis Hayden and Worcester clergyman Thomas W. Higginson led the abolitionists in an attack on the Suffolk County Courthouse in a futile attempt to free Burns. Their action resulted in the death of one marshal and the arrest of thirteen people.

The next day, Burns went to trial where he was represented by Richard Henry Dana, Jr., a prominent white Boston attorney who stepped forward to defend him without charge, and African American attorney, Robert Morris. Despite their spirited defense, Judge Edward G. Loring ruled in favor of Suttle, citing the Fugitive Slave Act.

To ensure the judge’s order to return Anthony Burns to Virginia slavery was carried out, about 2,000 federal soldiers were assigned on June 2, 1854 to escort Burns to Boston harbor. Surrounded by soldiers, Burns was marched through an angry crowd of abolitionists to the harbor, where he was placed on the ship and returned to Virginia.

Boston abolitionists, however, did not give up on liberating Burns from slavery. Boston Baptist preacher Leonard A. Grimes led supporters in raising money to purchase Burns’s freedom. On February 22, 1855 their efforts succeeded, and Burns returned to Massachusetts a free man.

After gaining his freedom, Burns attended Oberlin College in Ohio and then spent time as a pastor of a black Baptist church in Indianapolis. Later, he moved to Canada where he became the pastor of St. Catharine’s Ontario Baptist Church. On July 17, 1862, Burns died in Ontario at the age of 28.