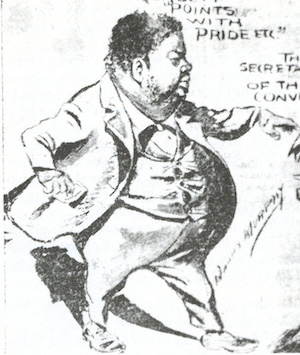 Samuel Burdett grew up in Kentucky. While still a young man, he joined the Union Army and served as a private for only twenty days before being promoted to corporal. Burdett fought for the last two years of the Civil War, and he was present at Appomattox when General Lee surrendered to General Grant.  In 1866 Burdett was assigned to the all- black Ninth Cavalry, and he continued to serve until his resignation in 1883.

Although it is unclear as to where he received his training, Burdette moved to Seattle with his wife Belle in 1890, where he opened up a successful veterinary practice.  He had become one of Seattle’s most prominent black professionals by 1900. During this time, Dr. Burdett attempted several failed business ventures including short-lived insurance and benefit agencies and a Mining and Loan Company.

Burdett was also active in local politics and African American organizations in Seattle. Though primarily a Republican, he flirted with Populism in the mid 1890s. In 1900 he was elected as King County wreckmaster, and was responsible for salvaging shipwrecks and clearing industrial logging debris in the coastal areas near Seattle. That same year he was nominated for the $1000 per year job of City Veterinary Surgeon; however, the appointment went to another veterinarian. In 1891 Burdette founded the Cornerstone Grand Lodge of the York Masons with Conrad Rideout and William Gross. Ten years later Samuel Burdett helped organize a local branch of the anti-lynching International Council of the World, and later that year he authored and published a chronology of lynching in the United States titled “A Test of Lynch Law: an Expose of Mob Violence and the Courts of Hell.”