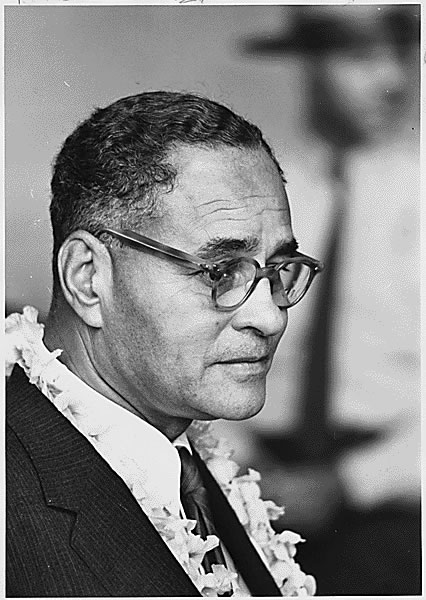 Ralph Johnson Bunche, American political scientist, renowned scholar, award winner, and diplomat, was one of the most prominent African Americans of his era. Bunche was born on August 7, 1903 or 1904 (there is some disagreement about the year of his birth) in Detroit, Michigan. His father Fred was a barber who owned a racially segregated barbershop that catered solely to white customers. His mother, whose maiden name was Olive Agnes Johnson, was an amateur musician.

Young Ralph spent his early years in Michigan. However, due to the relatively poor physical constitution of his mother and grandmother’s uncle, Charlie Johnson, the family settled in Albuquerque, New Mexico when he was ten years old. The family believed the dry climate of the region would be more conducive to his parents’ health. Yet both his mother and uncle died when Ralph turned twelve. His mother died of tuberculosis in 1917. His uncle committed suicide the same year. The circumstances surrounding his father are less fully known. The common narrative is that he left the family, remarried, and never returned.

Bunche continued his graduate studies at Harvard University in Cambridge, Massachusetts where in 1934 he became the first African American to earn a doctorate degree in Political Science from an American university. His dissertation comparing French Rule in Togoland and Dahomey received the Toppan Prize for outstanding research. While he was earning his doctorate degree, Bunche became a professor in the political science department at Howard University in Washington, D.C.

In 1942 Bunche began work as a senior social analyst in the Office of Strategic Services, which was the forerunner of the Central Intelligence Agency (CIA). In 1943 he joined the U.S. State Department. Toward the end of World War II he participated in the initial planning for the United Nations which was established in 1945. He was also a key figure in the creation and adoption of the UN Declaration of Human Rights in 1948. By that time Bunche was also establishing a record as a mediator in the already-violent Arab–Israeli conflict. It was that work which led to his being awarded the 1950 Nobel Peace Prize in Olso, Norway. Bunche was the first African American to be awarded the Prize.

Bunche’s passion for social and racial justice made him a strong supporter of the Civil Rights Movement in the 1960s. He was active in the movement and participated in both the March on Washington in 1963 and the Selma march in 1965.

He and his wife, the former Ruth Harris (one of his students at Howard), married in June 1930 and had three children: Joan, Jane, and Ralph, Jr. Jane, the middle child and youngest of the two daughters, committed suicide in 1966.

Throughout his groundbreaking career, Bunche remained on the Howard University faculty. He eventually chaired the department of Political Science at Howard for more than two decades where he taught generations of students. Afterwards, he taught at Harvard University from 1950 to 1952 and served on its Board of Overseers from 1960 to 1965. He also served as a trustee of Oberlin College, Lincoln University, and the New Lincoln School in New York City, New York. Dr. Bunche was a member of both Alpha Phi Alpha and Sigma Pi Phi fraternities.

By the late 1960s, Bunche’s health began to decline and he eventually resigned from his post at the United Nations. He died on December 9, 1971. He was survived by his wife and son and is buried in the Woodlawn Cemetery in New York City.