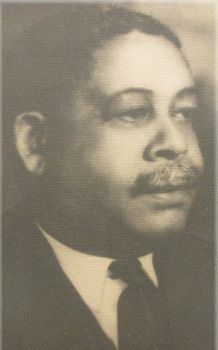 Charles Harmon Bullock was a prominent leader in the early 20th Century Colored Young Men’s Christian Association (YMCA) movement.  Born in Charlottesville, Virginia, on March 2, 1875, the son of former slaves Burkley and Mary Washington Bullock, Charles Bullock later graduated as salutorian of his class at Jefferson Normal School on June 27, 1892.  He became a teacher in the segregated Charlottesville public schools and simultaneously worked as a correspondent for The Daily Progress, a local African American newspaper.

In 1890 the national office of the YMCA decided to create a “Colored Men’s Department” which would sponsor individual Colored YMCA’s across the nation.  The national office envisioned these facilities as providing temporary housing, lending libraries, swimming pools and gyms for black men along with spiritual and educational training.  In an era when black public school facilities were often inadequate and cultural and civic facilities non-existent, these Colored YMCAs provided additional educational and cultural outlets in racially-segregated communities throughout the country.  Although endorsing segregated YMCAs in the North was often controversial with many civil rights groups, Bullock and others supported segregation, which brought a degree of autonomy that many in the African American community welcomed.

After completing a correspondence course with the international office of the YMCA on facilities management, Bullock organized an early “Y” in Charlottesville and was made its first executive secretary.  With the success of that facility, Bullock was asked to come to Brooklyn, New York where in 1900 he organized the first colored branch of the YMCA in that borough.  He was named the first executive secretary of Brooklyn’s Carlton Avenue YMCA.

Bullock returned to the South in 1906 and for the next decade as First Secretary, he managed the Louisville, Kentucky Y colored branch, where a modern building was erected under his supervision. Upon resigning that position in 1916 he transferred to Montclair, New Jersey where he served as director of the colored Y until his retirement in 1935. Under his leadership the Montclair colored branch erected another modern building, which became known as the Washington Street Branch YMCA at a cost of S175,000.  During World War I, through his work with the “Y,” Bullock also served in New Jersey as campaign director of the United War Work Campaign.

Charles Harmon Bullock died in Montclair, New Jersey on May 9, 1950.