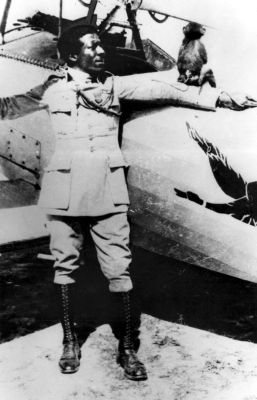 Eugene James (Jacques) Bullard, the first African American combat aviator, was known as the “black swallow of death” for his courage during missions. He led a colorful life, much of it in Europe.

Bullard was born in Columbus, Georgia, on October 9, 1895, the seventh child of Josephine Thomas and William O. Bullard. Eugene received a minimal education but learned to read, a key to his later successes. After witnessing the near-lynching of his own father and other racial violence, Bullard ran away from home in 1906. In Atlanta, he joined a group of gypsies and traveled with them, tending and learning to race their horses.

In 1912 as a teen, Bullard stowed away on German merchant ship bound for Aberdeen, Scotland. For the next two years, he performed in a vaudeville troupe and supported himself as a prizefighter in Great Britain and elsewhere in Europe. He first appeared in Paris, his long-time destination, at a boxing match in November 1913.

Bullard was nineteen years old when World War I broke out. He joined the French Foreign Legion, serving the Moroccan Division of the 170th Infantry Regiment. He was seriously wounded twice and pulled out of action. France awarded him the Croix de Guerre and Medaille Militaire for his bravery at the Battle of Verdun. In 1916 he joined the French air service, first training as a gunner but later as a pilot.

Bullard quickly became known for flying into dangerous situations often with a pet monkey.  He amassed a distinguished record, flying twenty combat missions and downing at least one German plane. When the United States entered the war, Bullard, and other American expatriates, applied for transfers to U.S. forces.  Despite Bullard’s flight experience, his application was denied, and the United States military pressured France to ground Bullard permanently to uphold the U.S. policy against black pilots. France succumbed and removed Bullard from aviation duty.

After the war, Bullard discovered jazz and eventually owning two nightclubs, including “L’Escadrille,” in the Montmartre section of Paris. Bullard married Marcelle Straumann in 1923 and had two daughters, Jacqueline and Lolita, but the marriage ended in divorce in 1931.

Bullard later joined a French counterintelligence network in the early years of World War II, spying on Germans in Occupied Paris. His nightclubs were popular with German officers, who had no clue that Bullard, fluent in German, was indeed a spy.

By the end World War II, although a national hero in France, Bullard and his daughters moved to New York City, New York. He established a new life, working odd jobs selling perfume and operating the elevator of the RCA building, home to The Today Show. In 1954 Bullard was interviewed for the show.

Eugene Jacques Bullard died in Harlem on October 12, 1961 at the age of 66.  In 1994 he was honored posthumously by the Smithsonian Institution’s National Air and Space Museum.