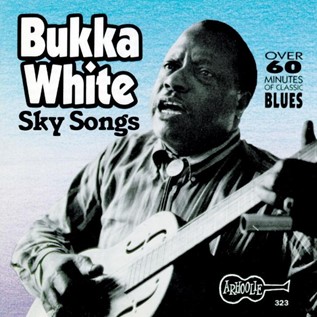 Composer, guitarist, pianist, storyteller Bukka White was born Booker T. Washington White on November 12, 1906, in Houston, Chickasaw County, Mississippi, to Herman and Sarah Farr White. He got his initial start in music, learning the violin with Cajun and blues tunes, and the guitar from his father. White’s mother and legendary blues guitarist B.B. King’s grandmother were sisters.

In 1919 when White was 13, he left for Chicago, where he played on the streets with a blind guitarist. At the age of 14 he returned to Clarksdale, Mississippi, where he stayed with an uncle. During that time, he contacted Delta blues legend Charley Patton, who taught him the rudimentary music theory for improvisation on the guitar and fiddle, and introduced him to other instruments. In addition to music, White pursued careers in sport, playing in Negro League baseball and, for a time, taking up boxing. He later served in the U.S. Navy from 1942 to 1944.

In 1930 White met and impressed Ralph Limbo, a talent scout for the Victor label and traveled to Memphis for his first recordings, singing the blues and gospel material. However, Victor only released four of the 14 songs White recorded that day. In 1937, Bukka recorded “Pinebluff Arkansas'” and “Shake ‘em on down” for the Vocalion label in Chicago. During the music session in Memphis, Tennessee police knocked at the door to arrest him for allegedly shooting a man in self-defense. While awaiting the trial, he jumped bail and headed for Chicago, making two recordings before being apprehended and sent back to Mississippi to serve three years at the Mississippi State Penitentiary called Parchman Farm. While he was serving time, White’s record “Shake ’em on down” became a hit.

In 1939 White, while still at Parchman, recorded for folklorist Alan Lomax’s American Music Project which eventually was housed at the Library of Congress. White’s album recorded for Lomax and called Sky Songs, Vols. 1-3, included more than 60 minutes of Blues. “Parchman Farm Blues” was one of the songs. The improvised songs allowed White to tell stories about the dusty street corners, dirt roads, juke joints, and jails that felt like home to him.

By 1970, White was still performing on the blues festival circuit.  He often experimented with new material but his fans waited to hear him play “Parchman Farm Blues.”  In 1973 White released the album Big Daddy which was a commercial and critical success for the 67-year- old bluesman. It was also his last album.

Bukka White died of cancer on February 26, 1977, in Memphis, Tennessee. He was 70. However, he was posthumously celebrated in 1990 by being inducted into the Blues Hall of Fame. On November 21, 2011, the Recording Academy announced the addition of White’s “Fixin’ to Die Blues” to its 2012 list of Grammy Hall of Fame Award.