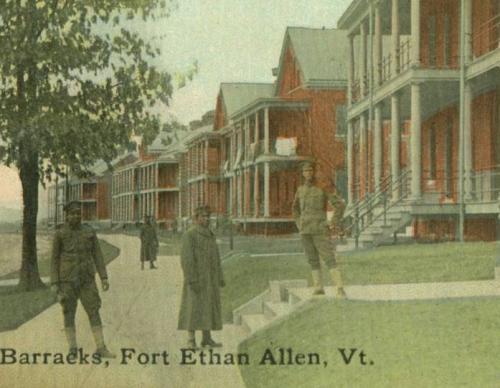 In July of 1909, 750 10th Cavalry “Buffalo Soldiers” marched into Vermont for their assignment at Fort Ethan Allen, Colchester, Vermont.  Prior to their arrival, they had been stationed in various other locations such as Cuba, Kansas, and the Philippines, all warmer climates.  During their first fall and winter in Vermont they were ill equipped for the weather as they were still wearing summer issue clothing. The first winter at Fort Ethan Allen was long and hard with guard duty occasionally walked in blizzards.

The 10th Cavalry performed various maneuvers, parades, and celebrations while at Fort Ethan Allen.  They participated in the Hudson-Fulton celebration in Albany, New York and served as escorts for General Oliver O. Howard’s funeral.  They took part in the dedication of the Saratoga Battle Monument and engaged in maneuvers in Massachusetts, Connecticut, New York, and Virginia.  The longest and most important maneuvers were held in the summer of 1913 near Winchester, Virginia with two white cavalry regiments, the 11th and 15th, testing new cavalry tactics.

The local white community also reacted to their presence.  Almost overnight Burlington acquired a substantial black community, a situation that clearly dismayed many residents. Shortly after their arrival, however, racial tensions began to decline.  The professionalism and conduct of the troops consistently impressed the community and attitudes gradually changed.  By the time the black troops left Fort Ethan Allen for Fort Huachuca, Arizona in December 1913, Vermont newspapers and citizens were consistently praising their “courteous and gentlemanly conduct.”  Some soldiers remained in the area after discharge or retirement.  Several of the African American veterans formed a tight knit community in Winooski, Vermont where they became well-respected, hard working, law-abiding citizens who raised families there.  Some buffalo soldiers are buried in the nearby national cemetery.  Descendants of the soldiers still reside in Vermont.