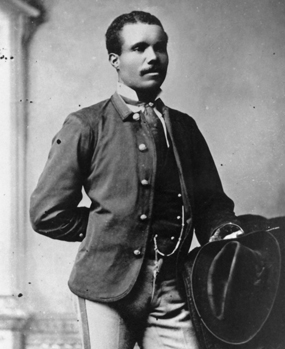 In 1849 the U.S. Army established its first military post in the Pacific Northwest at Vancouver, Washington.  Known varyingly as Columbia Barracks, Fort Vancouver, and, since 1879, Vancouver Barracks, the post played a leading role in major military actions in the nineteenth century American West, including labor disputes, police activities, and American Indian campaigns.

Although far less identified with Buffalo Soldiers than many other military outposts in the West, Vancouver Barracks is nonetheless an important location in the Buffalo Soldier diaspora. It served as a major departmental headquarters and transportation hub for moving Buffalo Soldiers throughout the Pacific Northwest and Alaska in the late nineteenth and early twentieth centuries.  It was also the home to the Twenty-fourth Infantry’s Company B for thirteen months.

On April 3, 1899, soldiers from Company B of the Twenty-fourth United States Infantry Regiment arrived at Vancouver Barracks and served as part of the post’s garrison of soldiers for the next thirteen months. While stationed at Vancouver Barracks, Company B responded to the Coeur d’Alene labor strife in Northern Idaho, playing a role in one of the major labor-capital conflicts of the nineteenth century.

Soldiers from Company B also became directly involved in one of the largest issues of the day to African Americans, the desire for black officers to command the regular army’s African American units. Several sergeants received commissions as officers in volunteer regiments while at Vancouver Barracks, but one private brought the issue of the absence of black officers in the regular army to the region’s white press.  Pvt. James G. Cole’s September 26, 1899 letter to the editor of the Portland Oregonian stands as an articulate and expressive statement that captures the African American zeitgeist like few other epistles. While stationed at the post, he argued for the necessity of black officers commanding black soldiers, a concern voiced by African Americans both inside and outside the army. With emotionally charged language, he also directly addressed the hypocrisy of Jim Crow-era racism faced by African American soldiers. “These brave boys did not stop to ask if it was worth while for them to lay down their lives for a country that has silently allowed her citizens to be killed and maltreated in almost every conceivable way,” he opined. “They did not stop to ask if their death would bring deliverance to their race from mob violence and lynching. They saw their duty and they did it.”

Several distinguished Buffalo Soldiers ended their military careers at Vancouver Barracks, including Edward Gibson and Moses Williams. Gibson’s life encapsulates the Buffalo Soldier story; enlisting in 1869, he served with the Tenth Cavalry, the Hospital Corps, and the Twenty-fourth Infantry throughout the West for more than 30 years and learned to read and write in the process. Moses Williams, a decorated Medal of Honor recipient and Ninth Cavalry veteran, retired to Vancouver after a long career.  In fact, he lived the remainder of his life at Vancouver Barracks, and was buried in the Vancouver Barracks Post Cemetery. A monument honoring Williams and three other Medal of Honor recipients graces the lawn near the northeast entrance to the Vancouver National Historic Reserve.  He is buried in the post cemetery next to another Buffalo Soldier, Thomas White, who drowned in a pond near the post in 1899.