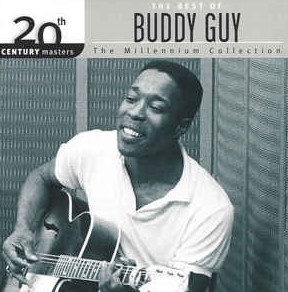 The blues guitarist George “Buddy” Guy was born on July 30, 1936 and reared on a farm without modern conveniences near Lettsworth, Louisiana, to Sam Guy and Isabel Williams Guy, sharecroppers. There were five children, one of which was his fellow bluesman Phil Guy. Buddy Guy began learning to play by creating a two-string bow. His father’s friend later gave him an acoustic guitar. Guy finished the eighth grade at the Rosenwald School in New Roads, Louisiana, in 1950 and spent another studying in Baton Rouge.

Guy worked in Louisiana State University’s Facility Services Department as a housekeeper from 1955 until 1958 before migrating to Chicago, Illinois to pursue a music career. There, he was mentored by Muddy Waters. The following year, 1959, Buddy married Joan Guy and they became parents to six children.

By 1965 Guy was performing in Great Britain. He performed regularly at the Marque Club in London.  The next year he recorded with bluesman Junior Wells for Delmark Records and performed in American Folk Blues’ European tour. Two years later, in 1967, Guy signed with the Chess label and released his debut album, I Left My Blues in San Francisco. In 1969, he returned to Great Britain and performed at the Supershow in Staines, England.

In 1972 Guy partnered with L.C. Thurman to establish The Checkboard Lounge in Chicago and three years later married a second time to Jennifer Guy. The couple had two children, including Female Rapper Shawnna.

In 1990 Guy signed with England’s Silverstone Records and released the album Damn Right, I’ve Got the Blues the following year. The album peaked on the Billboard 200 at no. 136 and remained on charts for six weeks. It sold more than 500,000 copies earning Guy his only gold record. The second album, Feels Like Rain, reached no. 145 and stayed up for seven weeks in 1993.

In 1996, released Live: The Real Deal and two years later in 1998, Heavy Love. In 1999 he released Buddy’s Baddest: The Best of Buddy Guy, and the same year he was inducted into the Guitar Center’s Hollywood Rockwalkon. In 2005 he was indicted into the Rock and Roll Hall of Fame and three years later into the Louisiana Music Hall of Fame. Guy’s album, Living Proof, was released in 2010 and peaked at no. 46 on the Billboard Blues chart and stayed charted for three weeks.

In 2014, Guy was awarded an Honorary Doctorate from Louisiana State University and a tiger-striped guitar from LSU President King Alexander for his distinguished music career. In 2015, he was awarded a Grammy Lifetime Achievement Award from the National Academy of Recording Arts and Sciences.