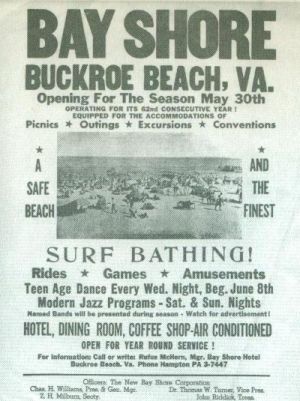 Buckroe Beach is one of the oldest recreational regions in Virginia. In 1619, the “Buck Roe” plantation was designated for public use for the newly arrived English settlers sent by the Virginia Company of London. By 1637, however, the plantation was converted into a commercial tobacco farm. After the Civil War, Buckroe became a fishing camp used by both black and white fishermen. In 1890 a group of Hampton Institute administrators purchased eight acres of beachfront on Chesapeake Bay to provide a place for student exercise and the location of a hotel which could host out-of-town guests. Led by Frank D. Banks, the administrators pooled their funds to build a four-room cottage they ambitiously named the Bay Shore Hotel.

As word spread, this rare Atlantic coast resort open to African Americans soon drew visitors from as far away as New York and Georgia on summer weekends. By 1925 this summer vacation destination grew to include the now seventy-room Bay Shore Hotel, a pavilion, amusement park, and boardwalk along its 275-foot waterfront. By 1930, Bay Shore Beach and Resort, as it was now called, rivaled all-white Buckroe Beach Amusement Park and in fact the two facilities sat side by side with a fence separating the properties that extended across the beach and into the Chesapeake Bay.

Just before World War II one local transportation company extended its tracks and trolleys to Phoebus, the community that included Bay Shore Beach and Resort, to encourage more white and black visitors from nearby Hampton, Newport News, and other Tidewater cities to come to the beach area. With a growing number of visitors including servicemen and their families during World War II, the beach area was increasingly built up and eventually annexed to Hampton in 1952.

Like other black east coast beaches, Bay Shore Beach was on the circuit for locally and nationally prominent black musicians from Cab Calloway to James Brown, who played before illegally integrated audiences (as white fans climbed over the fence to see their favorite artists). Nonetheless Buckroe Beach, as the entire area was now known, continued to be officially divided between blacks and whites by the fence which separated the races both on the sand and in the water.

After the 1964 Civil Rights Act, Buckroe Beach quickly integrated. Yet both white and black resorts suffered as beach goers shifted to Virginia Beach east of Norfolk and because of competition from Bush Gardens in nearby Williamsburg. By 1973 the Bay Shore Beach Resort Hotel closed and was torn down in October 1977.

In the first decade of the 21st century Buckroe Beach had a renaissance. Investors built a mile long boardwalk and installed a large playground for children as well as cycling and walking paths, a pavilion equipped with barbeque grills, and picnic tables, all making the area family friendly. The popular Buckroe Beach fishing pier, destroyed by Hurricane Isabel in 2003, was rebuilt by the City of Hampton and reopened on May 30, 2009. Local merchants also sponsor the annual Hampton Jazz Festival.

Today Buckroe Beach is on the National Register of Historic Places and in 2010 had a year-round population of 1,977.