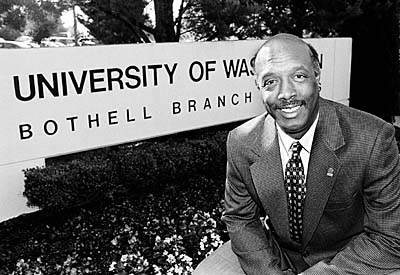 Warren Buck was Chancellor (now Emeritus and professor) of the University of Washington, Bothell (UWB), in Snohomish County, from June 1999 through June 2005. Dr. Buck was born on February 16, 1946 to Mr. & Mrs. Warren W. Buck Jr., in Washington, D.C. Buck earned his high school diploma in 1963, at Spingarn High School, Washington, D.C., and then enrolled for two years of study (1963-65) at Lincoln University in Jefferson City, Missouri. He earned his B.S. in Mathematics at Morgan State University, Baltimore, Maryland in 1968 and two years later received an M.S. in Physics (1970: Experimental and Theoretical Plasma) from The College of William and Mary in Williamsburg, Virginia. He received a Ph.D. in Physics (Theoretical Relativistic Nuclear), from William and Mary in 1976.

Warren Buck was the founding Director/Principal Investigator of the Nuclear/High Energy Physics (NuHEP) Research Center of Excellence while a professor of Physics at Hampton University in Hampton, Virginia. In addition to helping to build a scientific program at the Jefferson Lab and creating the popular HUGS at CEBAF Summer School for graduate students and the Undergraduate Institute in Physics/REU summer program, Chancellor Buck serves, and has served, on a variety of national and international physics and educational committees that include the Board of Directors of the Thomas Jefferson National Accelerator Facility’s Users Group. His efforts at Hampton University spurred the creation and implementation of the Hampton University Ph. D. Degree program in physics; the first PhD degree program on the Hampton campus.

Buck is nationally and internationally recognized for his work in physics and physics education and is a Fellow and Life Member in the American Physical Society. Buck has numerous publications with the most recent one being titled, “Opening New Frontiers in Space: Choices for the Next New Frontiers Announcement of Opportunity” for the Committee on New Opportunities in Solar System Exploration: An Evaluation of the New Frontiers Announcement of Opportunity (April 2008). Dr. Buck returned to the faculty in Sept 2006 and teaches physics at UW Bothell and at UW Seattle as Adjunct Professor of Physics.

While Dr. Buck has spent most of his professional life working in physics and university administration, he has continued to explore an internal desire for artistic expression and is owner of Buck-ART, LLC. Recently, Buck returned to acrylic painting creating the Omega series. Hence the Omega series, where bodies flow into auras (energy fields) and auras flow into other auras and bodies flow into symbolizing our complex, multifaceted connectivity with each other. Dr. Buck is currently married to Cate Buck. The couple has four adult children.