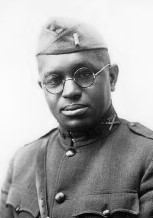 Often referred to as “Mr. Jazz Himself,” Lieutenant James Tim Brymn was a conductor, a musical director of several George Walker and Bert Williams Shows, and bandleader of the all African American 350th Field Artillery Regiment Band during World War I. The band was also known as the Seventy Black Devils, Black Devil Orchestra, and often advertised as “The Overseas Jazz Sensation.”

James “Tim” Brymn was born in Kingston, North Carolina in 1881. Brymn was educated at the Christian Institute and Shaw University in Raleigh, North Carolina, before attending the National Conservatory of Music in New York. After completing his education at the National Conservatory, he decided to settle in New York City. By 1900 he began composing and by 1905 he had written five popular songs: “Morning Noon and Night,” “O-San, Powhatana,” “Travel On,” and “Darktown Grenadiers.” These were songs most likely used for the Smart Set Shows, associated with the popular literature magazine in the early 1900s.

In 1918 Brymn entered the U.S. Army and was commissioned a 2nd Lieutenant. He served throughout the war with the 350th Field Artillery and became bandleader of the regimental band, the “Black Devils.” In 1919, Brymn’s Black Devil Orchestra performed before President Woodrow Wilson and General John Pershing during the President’s visit to France at the opening of the Peace Conference.

The only rival band of the Black Devils was James Reece Europe’s 369th Infantry Band (the Harlem Hellfighters). The two bands were well known in all the Allied countries and were credited with having introduced jazz in France. The Seventy Black Devils returned to the United States and made an appearance at The Academy of Music in Philadelphia. The band was described by one observer at the time as “a military symphony engaged in the battle of Jazz.”

After their return to the United State Brymn and his Black Devil Orchestra would release over the next decade twelve albums including “Daddy Won’t You Please Come Home,” “Don’t Tell Your Monkey Man,” and “Siren of the Southern Sea.” He also released the album, “Aunt Hagar’s Children Blues” under the name “Tim Brymn’s Black Devil Four,” featuring an unknown male harmony group.

After World War I, Brymn led orchestras at Ziegfeld’s Roof Garden and Reisenweber’s Jardin de Dance, two prominent nightclubs in New York City. He also served in the 1920s as the musical director of James Reece Europe’s popular Clef Club in Harlem despite the fact that Europe had been his rival during World War I.