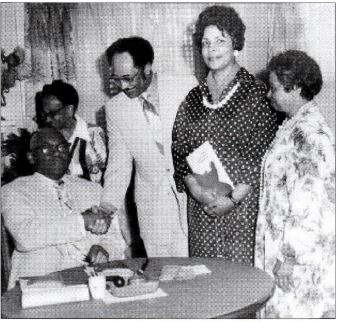 Ira Babington (I.B.) Bryant, Jr., Ed.D., was an educator, author, researcher, and administrator from the Houston, Texas area.  Bryant was born October 18, 1904, in Crockett, Texas, to Ira B. Bryant, Sr., and Ellen Starks Bryant, both educators. In 1905, the family relocated to Caldwell, Texas, before settling in Houston in 1920. Ira, Jr., attended Colored High School in the city. While at Colored High School, Ellen Starks Bryant passed away and Ira, Sr., remarried and moved to Alabama, leaving Bryant and his two brothers, Cecil and Eugene, to finish their educations in Houston.

After graduating in 1924, Bryant worked on a ship based out of New Orleans, Louisiana in order to save money for college and to travel. The same year, he entered Fisk University in Nashville, Tennessee, completing a B.A. degree in 1928. In 1929, he moved back to Houston and gained a job teaching social science at Phillis Wheatley High School. During summers, he continued his education, earning an M.A. degree at the University of Kansas in 1932.  Bryant returned to Houston and married Thelma Scott, another teacher at Wheatley.  The couple moved into a newly-built house in Houston’s Third Ward.

While at Wheatley, Bryant published The Development of the Houston Negro Schools (1935) and The Texas Negro under Six Flags (1936). In 1938, he was promoted to assistant principal at Booker T. Washington High School, formerly Colored High School and Bryant’s alma mater. Beginning in the late 1930s, Bryant began studying for a doctorate at the University of Southern California, traveling there during summers as he had done for his Masters. He completed his Doctor of Education degree in 1948; his dissertation was called “Vocational Education in Negro High Schools in Texas.”

Bryant was active in the Houston black community, serving on the Board of Directors for the Houston chapter of the National Association for the Advancement of Colored People (NAACP) as it argued the Smith v. Allwright case before the Supreme Court, which banned all-white primary elections in 1944. He was also a trustee at Good Hope Baptist Church and a member of the Citizens Chamber of Commerce. In addition to his duties at Washington High School, in 1948 he began a concurrent post as Professor of Education at Texas State University for Negroes, later Texas Southern University. He also served as a part-time lecturer at Prairie View A&M College and Bishop College.

In 1957, Bryant was reassigned as principal at Kashmere Gardens High School, where he remained until his retirement from the Houston school district in 1968. From 1968 to 1970, he was a Professor of Education at Dillard University in New Orleans. In 1970, he returned to Houston to serve as a part-time lecturer at Texas Southern University until 1973. During the 1970s, he continued to publish, including Texas Southern University: Its Antecedents, Political Origin, and Future (1975); Barbara Charline Jordan: From the Ghetto to the Capitol (1977); and Andrew Young: Mr. Ambassador (1979).

Bryant’s health began to decline rapidly in 1984, and he died at his home on December 16, 1989.  He was survived by his wife of fifty-seven years. They had no children.