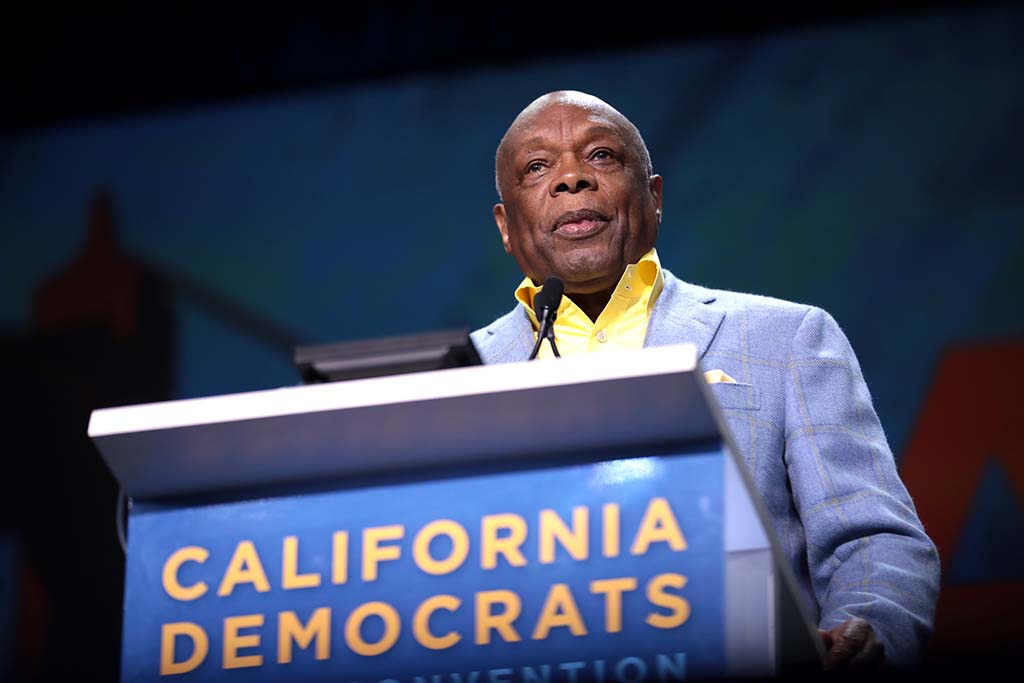 Former State Legislator and Mayor Willie Lewis Brown Jr. was born in Mineola, Texas, to Willie L. Brown, Sr., and Minnie (Boyd) Lewis on March 20, 1934. After migrating to San Francisco, California in 1951, Brown worked as a janitor in order to subsidize his education at San Francisco State University. Upon his arrival in San Francisco, Brown immediately joined the United Methodist Church, which was committed to social action, where he became the youth leader. In his attempts to make the world and himself more “comfortable,” he also participated in the San Francisco civil rights protests in the late 1950s. He earned his bachelor’s degree from San Francisco State University in 1955. In 1958, he earned a Juris Doctorate degree from Hastings College Law School.

While searching for a house, he and his wife, Blanche Vitero, were discriminated against. The Browns, along with some friends, protested and “brought the issue of racism in housing to the forefront of public attention.” Although, the Browns did not buy the house, they were successful on another front—placing the Brown name in the political arena.

In 1962, Brown launched his career in politics in a losing effort against state assemblyman Ed Gaffney.  Two years later, he was elected to the California State Assembly from a district that was eighty percent white. In 1974, Brown campaigned to become Speaker of the California Assembly, considered the second most powerful position in the state. Although his first bid failed, in 1980 Willie Brown, Jr., became the first African American speaker of the California Assembly. He held that position for fifteen years, longer than anyone in history.

As Speaker, Brown wielded tremendous power. He promoted the passage of significant legislation including the bill requiring motorists to wear seat belts, legislation increasing educational and health testing standards, compensation for crime victims, and the regulation of healthcare costs for low-income families.

Because of term limitations, Brown did not run for re-election in 1995. One year later he was elected the first black mayor of San Francisco. Mayor Brown “deliberately integrated” the city government. Within days of his inauguration, Brown appointed San Francisco’s first Chinese police chief, Fred Lau, while Bob Demmons, head of the San Francisco Black Firefighters Association, was advanced to Fire Chief.  Brown presided over the rapid growth of the high tech industry in San Francisco.  His tenure was also marked by significant real estate development and numerous public works and city beautification  projects. Willie Brown, a member of Alpha Phi Alpha Fraternity, served two terms as Mayor, stepping down in 2004.