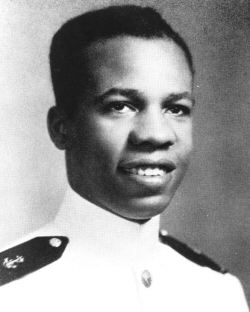 Wesley Brown earned distinction in 1949 as the first African American to graduate from the United States Naval Academy.  Wesley Brown grew up in Washington, D.C. and attended Dunbar High School.  A “voracious reader,” Brown joined the Association for the Study of Negro Life and History to study his history and heritage.  At Dunbar, Brown was a member of the Cadet Corps and worked evenings as a youth mailman at the Navy Department.  Brown was nominated by Adam Clayton Powell, Jr., a New York Congressman, for appointment into the Naval Academy and was accepted.

Wesley Brown began classes in 1945 and voluntarily decided to room alone.  “I wasn’t sure I wanted them to share my burden,” he said.  He faced racism in the first year, picking up 140 out of a possible 150 demerits, but as his education continued found that many were “supportive and protective” of him.

Brown graduated in 1949 with an engineering degree, and was assigned to the Navy Civil Engineering Services Department.  He served 20 years in the Navy’s Civil Engineer Corps where he built houses in Hawaii, roads in Liberia, wharves in the Philippines, a nuclear power plant in Antarctica and a desalination plant in Cuba. He rose to the rank of lieutenant commander and retired in 1969.

Later Brown joined the faculty at Howard University where he remained until 1988. The new Navy Midshipmen Training Fieldhouse at the Naval Academy is named after Wesley Brown to honor his achievements.

Wesley Brown, a member of Alpha Phi Alpha Fraternity, died of cancer on May 22, 2012 in Silver Spring, Maryland at the age of 63.