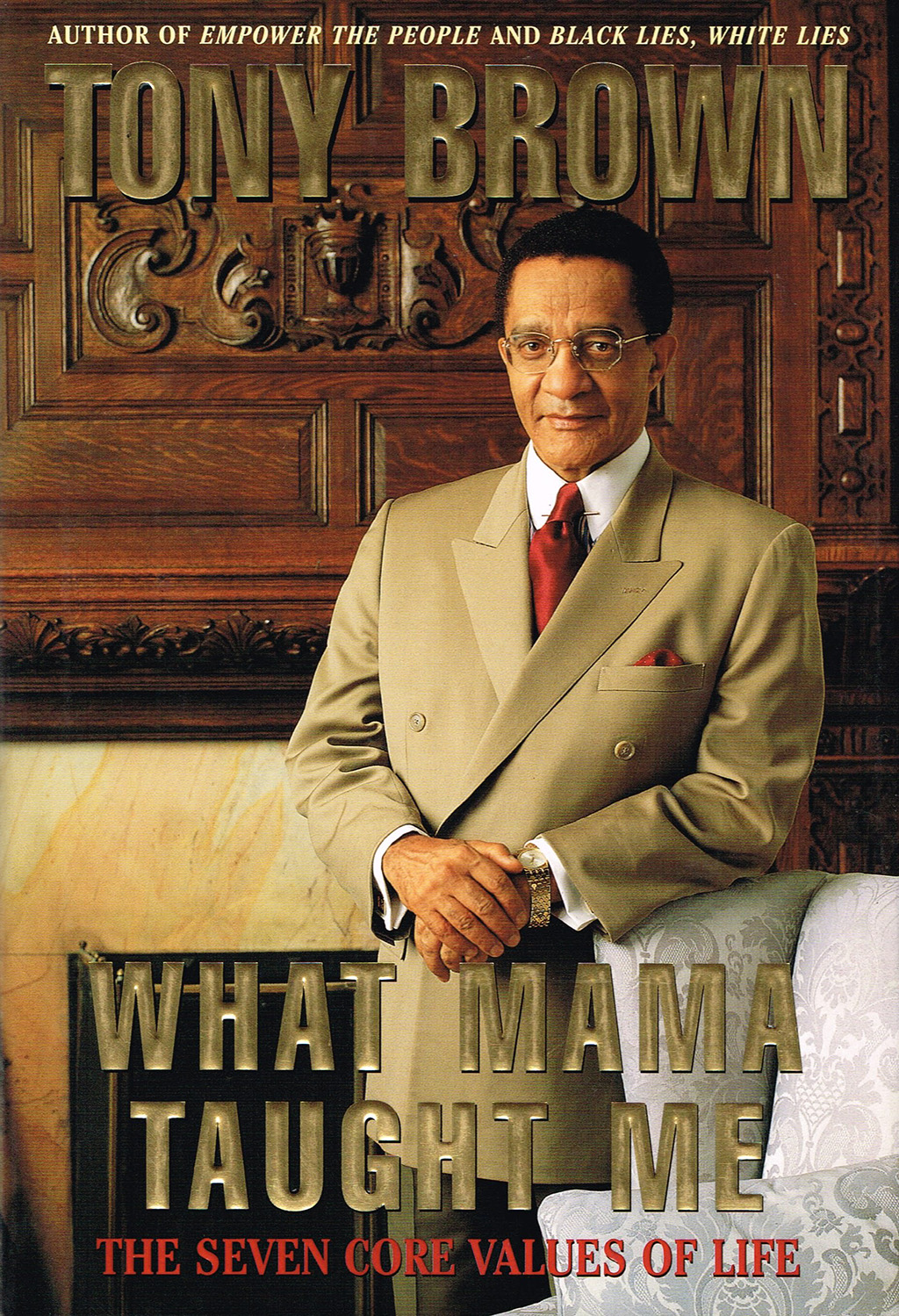 What Mama Taught Me by Tony Brown
Fair use image

William Anthony (Tony) Brown, a pioneer in television programming for African American audiences, was born in Charleston, West Virginia on April 11, 1933 to Royal and Katherine Brown.  The youngest of five children, he did well in school, excelling in English and drama, and overcame his shyness by reading Shakespeare on a local radio station.

Brown joined the U.S. Army in 1953, and then entered Wayne State University in Detroit in 1955.  He received his Bachelor’s Degree in Sociology in 1959, and a Master’s Degree in Psychiatric Social Work from the institution in 1961.  Soon afterwards Brown became active in the civil rights movement.  In June 1963 he organized the “Walk to Freedom with Martin Luther King” in Detroit which many observers considered the “dress rehearsal” for King’s involvement in the March on Washington two months later.  In 1963 Brown also began working at the Detroit Courier as a drama critic and eventually moved up to city editor by 1968.

In 1968 Brown first became involved in television when he assumed the post of public affairs programmer at WTVS, Detroit’s public television station.  Soon after he was hired Brown produced the station’s first show for African Americans called CPT, or Colored People’s Time.  He also hosted Free Play, another program directed at the city’s African American population.

In 1970, Brown moved to New York City to become the executive producer and host of Black Journal in New York City.  Black Journal was a well known monthly program funded by the Corporation for Public Broadcasting that had already won the Emmy, Peabody, and Russwurm awards by the time of Brown’s arrival. Nonetheless his controversial style and candor on government and public broadcasting topics boosted the show’s ratings, and by 1971 the show began to air weekly. In 1977, Brown negotiated with Pepsi-Cola to sponsor the show as Tony Brown’s Journal. This program, still on the air, is the longest running national public affairs TV series on PBS.

Brown persistently highlighted African American economic and political progress on his program.  He also became an advocate for black women and men interested in the broadcasting field.  In 1971 he was appointed the founding Dean of the Howard University School of Communications.  In 1985 he founded the Council for the Economic Development of Black Americans (CEDBA) which encouraged African American consumers to patronize black merchants who displayed the “Freedom Seal” and actively supported community issues.  Brown, a member of Alpha Phi Alpha Fraternity and a prominent Republican, was a leading post-1970 advocate of African American economic development through black capitalism.

In 1988, at the height of the cocaine epidemic that swept across black America, Brown released his first feature film which he provocatively called The White Girl.  The film focused on cocaine addiction and self-hate.

In 1990, Brown began writing a series of self-help books.  The first book in this series, Black Lies, White Lies: The Truth According to Tony Brown addressed ways to solve racial issues in the U.S. and improve our economy.  Two other books, Empower the People:  A 7-Step Plan to Overthrow the Conspiracy That is Stealing Your Money, and What Mama Taught Me: the Seven Core Values of Life described how self-empowerment can help people overcome their obstacles and achieve their goals.