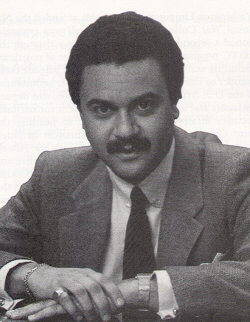 Described by President Bill Clinton as “one of the best advisors and the ablest people I ever knew,” Ron Brown was an influential leader in the Democratic Party.  Ronald Harmon Brown was born in Washington, D.C., on August 1, 1941.  His father, William, was a graduate of Howard University and an official in the Franklin Roosevelt Administration. William Brown married Gloria Osborne in 1940.  In 1947, William Brown left government service to become the manager of the Hotel Theresa in Harlem, which was often frequented by the leading black intellectuals and celebrities in the U.S.  This rarefied environment offered Brown a wealth of opportunities for high-level social interaction.

Brown exhibited leadership and negotiating skill early. Brown became the first African American member of Sigma Phi Epsilon Fraternity when he attended Middlebury College in Vermont.  His entrance prompted the national fraternity to change its constitution to allow black members.  In 1962, Brown graduated from Middlebury, married Alma Arrington, and became an officer in the U.S. Army where he commanded units stationed in the U.S., Germany and South Korea until 1967.  Brown was also a member of Sigma Pi Phi Fraternity.

Returning to civilian life, Brown took a position with the National Urban League.  He also attended St. John’s University Law School at night, graduating in 1970 and passing the bar in 1971.  Brown stayed with the Urban League for more than a decade, rising to become its deputy executive director, general counsel, and vice-president of its Washington bureau.  Through his work at the Urban League, he became known in Washington’s political circles. He left in 1979 to work on the late Senator Edward M. Kennedy’s campaign for the Democratic presidential nomination.

When Senator Kennedy returned to the Senate, he offered Brown a position as Counsel to the Senate Judiciary Committee, which the Massachusetts Senator chaired.  Brown was recruited from that position to become the first African American partner at the renowned Washington law firm Patton, Boggs & Blow, where he became a highly influential, successful, and sought after lobbyist.  He continued to be active in Democratic Party politics, playing a strategic role in Rev. Jesse Jackson’s 1988 presidential campaign.  The following year he became the first African American to head a major U.S. political party as chair of the Democratic National Committee from 1989 to 1992.

Having successfully led the Democratic Party to victory in the 1992 presidential campaign, Brown accepted an appointment in the Clinton Administration as the first African American Secretary of Commerce.  Brown used the cabinet-level platform to advocate for the Clinton administration’s aggressive campaigns for free trade and to increase demand for American exports by opening new markets.  Brown and 34 others perished in a plane crash in Croatia on April 3, 1996 while on one such mission.  He was 54 years old and is survived by his wife, an executive with Chevy Chase Bank, daughter, Tracey, and son, Michael, both lawyers.

Ron Brown was honored posthumously by President Bill Clinton with the Presidential Citizens Medal in 2001.  A host of other institutions and programs were established in his honor, including among others, the Ronald H. Brown American Innovator Award sponsored by the U.S. Department of Commerce, The Ronald H. Brown Center for Civil Rights and Economic Development at St. John’s University School of Law, and the Ron Brown Business Economic Summit sponsored by the California Black Chamber of Commerce.