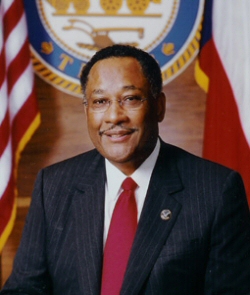 Lee Patrick Brown, known as “The Father of Community Policing,” became the first African American Mayor of Houston, Texas in 1997.

Brown began working as a patrol officer for the San Jose Police Department during his college years. Then in 1968, he took a teaching post at Portland State University in Oregon.  In 1972 Brown was appointed associate director of the Institute for Urban Affairs and Research at Howard University in Washington, D.C., a job he held until 1975.  Brown returned to Oregon and became a deputy sheriff for Multnomah County (Portland), Oregon for two years.  By 1976 he was named the Director of the Multnomah County Department of Justice.

In 1978 Brown became the first African American commissioner of police for Atlanta, Georgia. Two years into his tenure, he became nationally known as the leading law enforcement official involved in the infamous Atlanta Child Murders.  Twenty-four people went missing and were later found murdered. Racial tensions rose when many observers assumed the serial killer was white.  Brown worked to calm racial tensions as the Atlanta police eventually arrested an African American man, Wayne B. Williams, who was tried and convicted for the murder of two of the victims.

Three years later President Bill Clinton appointed Brown Director of the White House Office of Drug Control Policy.  He resigned the position in 1995 and returned to Houston to teach at Rice University. Two years later on December 6, 1997, Lee P. Brown was elected the first African American mayor of Houston.  He served three two-year terms until stepping down in 2004. Brown is a member of Alpha Phi Alpha Fraternity.

Unlike many of his peers in law enforcement Brown urged the adoption of crime prevention techniques and community investment in education to impede the growth of crime.  He particularly urged urban public schools to adopt programs with pre-teens which urged the prevention of drug use.  He called on police departments to deploy officers to foot patrols and encouraged the visible police presence in high crime areas and positive public interactions with the community to build support for legitimate policing efforts.  These methods came to collectively be called “community policing.”