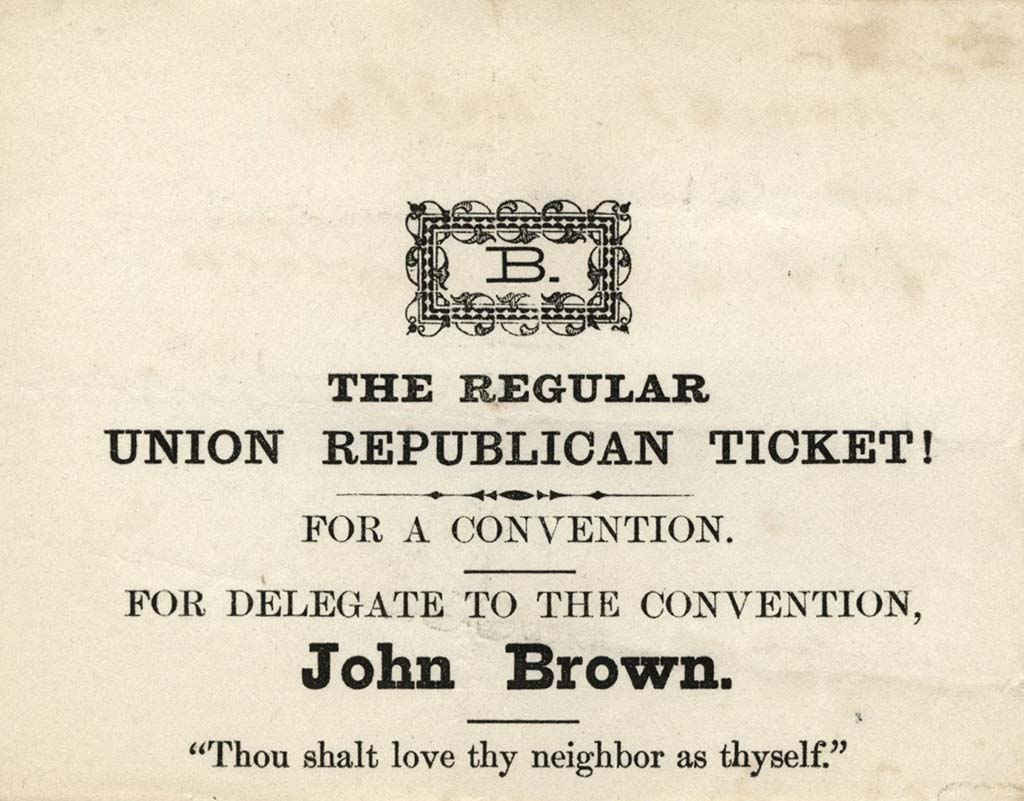 Born into slavery about January 1830, John Brown was owned by a leading Southampton County, Virginia planter named Robert Ridley. When Ridley died in 1852, Brown’s wife (whose name is unknown), two daughters and one brother were sold and taken to Mississippi.  He remarried about 1861 to a woman named Chloe with whom he had at least 5 children: three sons and two daughters.

In April 1867 Brown, who was illiterate, dictated a letter to the local agent of the Freedman’s Bureau that was sent to his daughters in Holly Springs, Mississippi. The letter was never received.

A Constitutional Convention was required during the Reconstruction Era to allow former Confederate states to rejoin the Union.  Brown and other politically active blacks in Southampton County spurred an alliance with moderate white Whig voters and formed the Regular Union Republican Party. In an amazing display of unity, almost 98 percent of registered black voters appeared at the polls on October 22, 1867. Brown had circulated a ballot as he ran for the Constitutional Convention with the reminder: “Thou shalt love thy neighbor as thyself.” All 1,242 black voters and one white citizen voted for Brown. This enabled him to defeat two white candidates. How Brown became the spokesperson for Southampton blacks is unknown; nonetheless his election shocked the county’s white leadership.

Brown helped to create the Underwood Constitution. Named for the Radical Republican Judge John C. Underwood. Underwood was one of the most conspicuous pre-Civil War anti-slavery white activists in Virginia and served as president of the convention. The Constitution created by the convention was a very dramatic leap forward as it extended the vote to all males, black and white, set up a system of free schools for all races, and established elective democracy at all levels of government in Virginia. This constitution would be replaced in 1902 by one that disenfranchised 90 percent of black and almost 50 percent of white voters.

Although Brown was appointed to the Committee on the Judiciary, he did not assume a conspicuous role at the convention. Major General John McAllister Schofield, the Union general controlling Reconstruction Virginia, noted that Brown had “no force of character.” Brown voted with Radical Republicans to reform and democratize the state constitution. Brown was not re-elected and the constitution was passed in 1869. Brown returned to Southampton County where he worked as a farmer and carpenter until his death sometime in 1900. He was 70 at the time of his death.