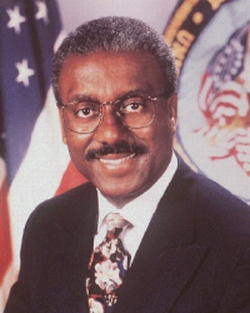 Jesse Brown, wounded veteran and government official, was born on March 27, 1944 to Lucille Brown in Detroit, Michigan.  His single-parent mother raised him in Chicago.  Brown first attended Roosevelt University in Chicago and later graduated from Kennedy- King College in that same city.

In 1963, Brown enlisted into the United States Marine Corps.  During the Vietnam War, he was seriously wounded while patrolling near DaNang.  The injury left his right arm completely paralyzed.  For his sacrifice, Brown received the Purple Heart and an honorable discharge.

In 1967, Brown found employment at the Chicago Bureau of the Disabled American’s Veterans (DAV).   Six years later in 1973, Brown had been promoted to supervisor of the appeals office for the DAV headquarters in Washington, D.C. Within ten years, Brown became headquarters manager.  In 1988, he became the DAV’s first African American executive director.  In this position, he often testified on veteran health issues before Congress. He challenged Congress’s efforts to decrease veteran’s benefits and criticized the deterioration of the veteran’s hospital system. While at the agency, he also created the system for health officials to diagnose and treat post traumatic stress disorder (PTSD) and physical side effects of Agent Orange.

In January 1993, President Bill Clinton nominated Brown to the position of Secretary of Veteran Affairs.   After Congressional hearings and confirmation, Brown took over this position in early 1993.  His agency contained 260,000 employees and he oversaw a budget of over $34.3 billion dollars.  During his tenure, he reengineered the healthcare system, created more healthcare services for female veterans, and developed resources for homeless veterans.  Although Brown resigned from his position in 1997, government officials and veterans praised his advocacy for veterans.  Brown’s commitment and dedication to improving the lives of veterans earned him the prestigious Presidential Unsung Hero Award by LIFE in 2000 and the Outstanding Disabled Veteran of the Year award by the Disabled American Veterans organization in 2000.

Jesse Brown died from Lou Gehrig’s disease in Warrenton, Virginia on August 15, 2002.  He is survived by his wife Sylvia, mother Lucille, and his two children, Carmen and Scott.