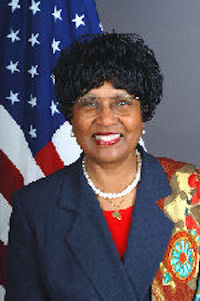 On July 2, 2009 President Barack Obama appointed Gayleatha Beatrice Brown to be the United States ambassador to Burkina Faso, a nation in West Africa.  This was her second ambassadorial appointment. Previously, Brown had been appointed by President George W. Bush to serve as U.S. Ambassador to Benin, a post she held from 2006 to 2009.

Brown was born in Matawan, West Virginia on June 20, 1947.  Her family moved to New Jersey when she was a child and she graduated from Edison High School, in Edison, New Jersey in 1964. She received bachelor’s and master’s honor degrees from Howard University in Washington, D.C. in 1968 and 1970, respectively.  Brown also did post-graduate work in international relations at the School of Advanced International Studies (SAIS) at Johns Hopkins University in Baltimore, Maryland.

Before joining the United States Foreign Service in 1982, Brown was a Special Assistant at the Agency for International Development (USAID). She was later Assistant Administrator for Africa and a legislative assistant to the House of Representatives.

Brown had had extensive overseas experience before her ambassadorial appointment.  Her first posts were, successively, as Development Officer at the U.S. Embassies in Paris, France and Abidjan, Côte d’Ivoire.  She also served as Counselor for Political Affairs at the U.S. Embassy in Pretoria, South Africa, and U.S. Consul General and U.S. Deputy Permanent Observer (concurrently) to the Council of Europe in Strasbourg, France.  She was Chief of the Economic and Commercial Sections at the U.S. Embassies in Harare, Zimbabwe, and Dar es Salaam, Tanzania.  She was also desk officer at the U.S. State Department for Canada, Senegal, Guinea, and Mauritania.

Brown has represented the Department of State at the Organization of Economic Cooperation and Development (OECD) at Credit Arrangement negotiations, and she was a Desk Officer for the U.S. Export-Import Bank (EXIM).

Brown’s honors and recognitions include the Lady of the Golden Horseshoe (West Virginia state academic honor), and as charter member of the New Jersey Edison Township High School Alumni Hall of Fame. She also received two Department of State Superior Honor Awards, a State Department Meritorious Honor Award, and a Presidential Meritorious Service Award. Brown is an honorary member of the Alpha Kappa Alpha (AKA) Sorority and the Sandown Rotary Club in Johannesburg, South Africa.  She was also among the first women members of the Rotary Club in Dar es Salaam, Tanzania.

Ambassador Brown was fluent in English, French and Swahili. She was a member of the Shiloh Baptist Church in Washington, D.C. and was associated with the Community Church of Iselin, New Jersey.

Ambassador Brown died on Friday, April 19, 2013, at the John F. Kennedy Medical Center, Edison, N.J. at the age of 65. Her mother Nellie and brother Curtis Brown survive her.