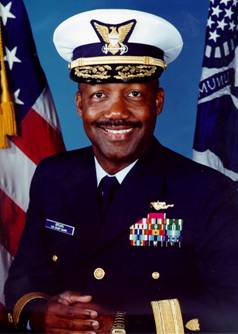 In July 1998, Erroll Mingo Brown became the first African American admiral in the United States Coast Guard in its 207-year history.  Brown was born in Ocklawaha, Florida.  He grew up in St. Petersburg and although he had planned to attend Florida Agricultural and Mechanical University, his interest in engineering and the benefits of the U.S. Military’s academic programs led him to apply in 1968, resulting in his acceptance to the Coast Guard Academy at New London, Connecticut.

Brown graduated from the Academy in 1972 with a degree in marine engineering.  Two years later he earned two master’s degrees from the University of Michigan, one in naval architecture and marine engineering, and another in industrial operations and engineering. In 1986, Brown received an MBA from Rensselaer Polytechnic Institute and in 1994 he received another master’s degree in national security and strategic studies from Naval War College.

Brown served on Coast Guard ships Burton Island and Jarvis as engineering officer, and on Rush as executive officer. He also taught marine engineering at the Coast Guard Academy. He has served as military assistant to the Secretary of Transportation, chief of the Budget Division in the Office of the Chief of Staff, U.S. Coast Guard, commanding officer of U.S. Coast Guard Integrated Support Command, and Commander of Maintenance and Logistics Command Atlantic. In July 1994, he was promoted to captain.

In June 2000, Brown and his wife Monica (née Hayes) Brown, moved their children Aaron and Elise-Estee to Bellingham, Washington where on June 2nd, he became commander of the Coast Guard’s 13th District which gave him jurisdiction over Washington, Oregon, Idaho, and Montana. This was one of only nine such assignments in the Coast Guard. He was responsible for 1,827 active-duty military and civilians, 600 reserves, and 1,600 uniformed Coast Guard Auxiliary volunteers. Also, at the time, Brown oversaw the only three icebreakers in use by the U.S. military, dispatching them for research on both the North and South Poles.

Rear Admiral Brown retired from the Coast Guard in 2005, putting in a total of 33 years of active duty in the U.S. military. At the time of his retirement, he was the Coast Guard’s highest ranking engineer. He holds a multitude of awards and honors including: Legion of Merit, the Meritorious Service Medal, and the Antarctica Service Medal, among others. He is also a member of the American Society of Naval Engineers, the Society of Naval Architects and Marine Engineers, and the American Society of Engineering Educators.