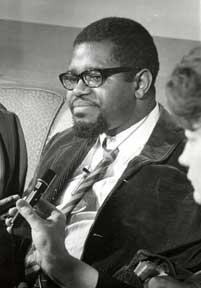 Novelist Claude Brown was born in New York City, New York on February 23, 1937 to parents who had migrated from the South. From a very young age, he was involved in small-time crime on the streets, and was in and out of institutions—including a psychiatric hospital and a reform school—until age 16, when he entered Washington Irving High School in Manhattan. Brown’s wit and skills impressed his instructors and he graduated in 1957. Supporting himself with numerous odd jobs, he enrolled at Howard University in Washington D.C., where he earned a B.A. in 1965. One of his instructors at Howard was the author Toni Morrison, who critiqued his writings.

In 1965 his book Manchild in the Promised Land was published to mixed reviews, particularly among black critics wary of its negative portrayal of black life. The work, however, also received acclaim as a stark and powerful portrayal of black youth growing up in the inner city in the 1940s and 1950s. His descriptions of the raw brutality of life on the streets are particularly poignant. A barely-veiled autobiography, the work emphasized the violence, despair and degradation of life in the poverty-stricken urban areas and serves as an emphatic social critique of the ghettoization of black youth. It sold millions of copies and was translated into several languages worldwide. In 1976, Brown published Children of Ham about urban black youth dealing with the heroin epidemic. The work, however, was overshadowed by the success and controversy of Manchild in the Promised Land.

Brown’s enduring significance to American literature is his vivid portrayal of the stigmatization and degradation suffered by young black men in a brutally honest way. He was one of the first African American authors to use gang violence, crime, broken families, lack of education, mental and emotional distress to describe the plight of young black men who would later be described by urban sociologists as the group most at risk and simultaneously the greatest challenge to inner city stability.

Brown attended law school following the publication of his book and remained deeply interested in social and urban issues throughout his life. After studying at Stanford and Rutgers, he hit the lecture circuit and spent his life highlighting the issues of young black men growing up in urban ghettos. He ran unsuccess­fully for the Harlem congressional seat once held by Adam Clayton Powell and worked his entire life to demonstrate that it was possible to overcome the despair of inner city life through education. He participated in and helped to establish a number of mentoring and rehabilitation programs for troubled inner city youths. Before his death, Claude Brown was working on another novel addressing the crack epidemic in the 1980s.

Brown died on February 2, 2002 of a respiratory condition. He was survived by his ex-wife Helen and two children.