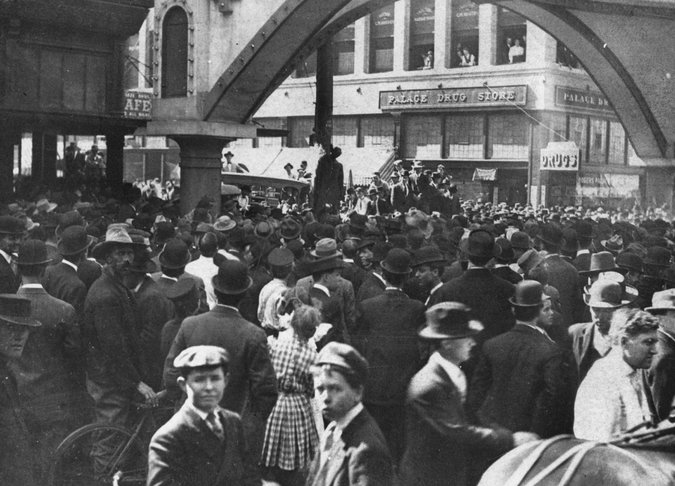 On Thursday, March 3, 1910, a Dallas, Texas mob lynched Allen Brooks, a fifty-seven-year-old African American man. His murder was one of a number of lynchings in major Texas cities.

Little is known about Brooks’s early life. He was born in either Maryland or Texas around 1853. By the beginning of the 20th century, he resided in Freedmanstown (also referred to as “North Dallas”), a black neighborhood adjacent to Dallas’s central business district. He found work as a house cleaner and laborer until the time of his death.

Mary Ethel Buvens, a three-year-old white girl, went missing for several hours on February 24.  She was found in her home with Brooks, who worked for the Buvens family. Brooks was accused of attempted rape, an allegation which he denied. After his arrest, local authorities relocated him to Sherman, Texas, sixty-five miles north of Dallas, to prevent mob violence. The following week, a small crowd gathered outside the Dallas County Criminal District Court to await Brooks’s arrival from Sherman for his trial. Brooks was placed in the jury room of the courthouse for his own safety. By 9:00 a.m., the corridors, stairways, and entrances to the courthouse were filled with eager spectators.

Brooks’ court-appointed attorneys asked for time to confer with their client before the trial. They were granted thirty minutes. Just outside the courtroom, the assemblage grew increasingly restless. As the crowd witnessed Brooks re-enter the jury room, wild cheering echoed in the hallways while more than a dozen law enforcement officers managed, at least temporarily, to calm what had become a fuming mob by reaching for their guns and stretching a double-chain barrier across the hallway.  By 10:00 a.m., Judge Robert Seay ordered the proceedings to resume. One of the attorneys requested a continuance to provide adequate time for him to advise his client and subpoena witnesses who could testify in Brooks’s defense.

When the mob, which now numbered one thousand people in and around the courthouse, heard a false rumor that a change of venue would occur as part of the continuance, they seized control of the judicial proceedings. Mob members rushed past the sheriff and his deputies and apprehended Brooks. They placed a rope around his neck, then tossed him out of a second story window to the approval of the awaiting throng positioned around the courthouse. Upon landing on his head, Brooks was rendered unconscious.

The mob, now numbering nearly three thousand, followed Brooks’s unresponsive body as he was dragged by automobile toward Dallas’ downtown business district. Once his body arrived at the intersection of Main and Akard Streets, a young mob member climbed a telephone pole with a rope around Brooks’s neck in his hand. He tossed it over an iron spike that protruded from Elk’s Arch, a more than thirty-foot, steel landmark erected by the local Fraternal Order of the Elks. Other members of the mob grabbed the hanging rope and hoisted Brooks into the air. He died within minutes. Several people cut strips of his flannel shirt as mementos of the day’s murderous events.  Others took photographs that became postcards.

A grand jury formed within days of the lynching and returned no indictments. No member of the mob, which eventually included 5,000 people, was ever held accountable for the murder of Allen Brooks.