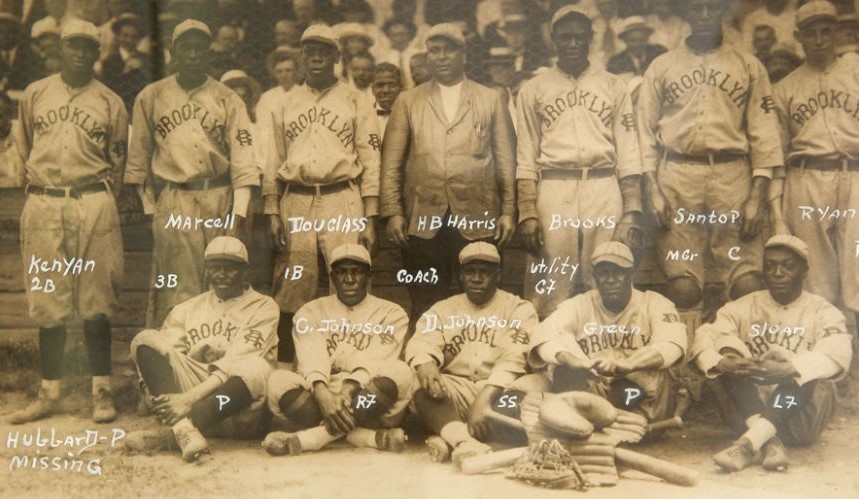 The Brooklyn Royal Giants were a top-ranked east coast Negro League team, originally formed in 1905 by John Wilson Connor, owner of the Brooklyn Royal Cafe, and managed by William Parker. They were organized as a “barnstorming club,” meaning they traveled through several states, playing local semi-pro black or white clubs and even college and amateur teams. The Brooklyn Royal Giants first played in the independent league, and most games were played against white semi-pro teams. For the 1907-1908 season, the team played in the National Association, and through 1923-1928, the team played out of Dexter Park, Queens, New York as part of the Eastern Colored League. The club returned to the independent league in their final years, from 1928-1942, and they claimed eastern championships in 1909, 1910, 1914 and 1916.

The Brooklyn Royal Giants also joined the National Association of Colored Baseball Clubs of the United States and Cuba in 1907. The Philadelphia Giants, the Cuba Giants of New York, the Cuban X-Giants, and the Cuban Stars of Havana were all part of the association and the league lasted for three years. The Giants were sold in 1917 to Nat Strong, a white booking agent for east coast teams and officer for the New York Black Yankees in the early 1920s. They became the charter members of the Eastern Colored League in 1923 but performed poorly due to the loss of their star players. Players often jumped teams after a season if a higher salary was offered, which caused many teams like the Giants to lose their fan base and disband after only a few seasons.

In 1923, the Royal Giants joined the Eastern League where they finished with a 18-18 won-lost record that season. The Eastern Colored League folded in 1928, and the club returned to playing in the Independent League. In the early years of the team, their roster boasted such players as Home Run Johnson, Bill Monroe, Billy Holland, Hurly McNair, and pitchers Dizzy Dismukes and Frank Wickware.

The Brooklyn Royal Giants dropped out of the Eastern Colored League after the 1927 season and continued as an Independent team before becoming associate members of the Negro National League in 1933. Owner Nat Strong died of a heart attack in 1935, and the team devolved to minor league status before finally folding in 1942. Nonetheless over the history of the team the Royal Giants roster had included Negro Baseball League stars “Smokey” Joe Williams, “Cannonball” Dick Redding, Charles “Chino” Smith, and John Henry “Pop” Lloyd.