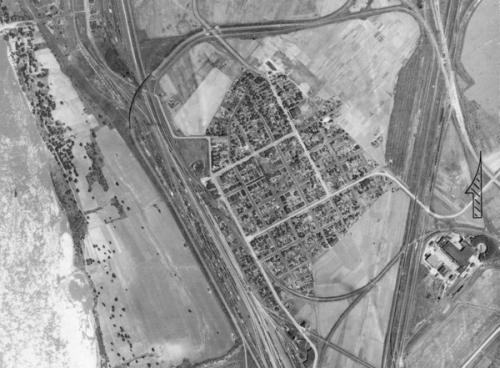 In the early 1820s, eleven African American families, some free, some fugitive, crossed the Mississippi River from the slave-state of Missouri to the free state of Illinois to found the first black town in the United States.  According to oral tradition, the group was led by Priscilla and John Baltimore, and included the Anderson, Sullivan, Singleton, Wilson, Cox, Wyatt, and Carper families.  Priscilla Baltimore had purchased her freedom from her master, a Methodist minister, and saw to it that religious faith would be one of the guiding pillars of her new community.  She also hoped the community would be a refuge for others fleeing slavery.

Shortly after forming their new settlement, the townspeople were visited by Bishop William Paul Quinn, a missionary minister for the African Methodist Episcopal (A.M.E.) Church.  Bishop Quinn, after meeting with the families in the Baltimore’s home, helped found the Brooklyn A.M.E. Church in 1825.  In addition to its public role as the community’s church, Brooklyn A.M.E, later called Quinn Chapel A.M.E. Church, became part of a network of A.M.E. Churches that formed the Underground Railroad in Illinois.  Tunnels still exist under the building that at one point secreted fugitive slaves.

The location of Brooklyn on the Mississippi River across from St. Louis, Missouri, helped its residents to become financially independent, providing opportunities for brick masons, carpenters, coopers, and boatmen.  Nonetheless the economic activities of African Americans in Illinois were restricted by the state’s Black Laws, enacted when the state joined the Union in 1819.  These laws restricted the occupations blacks could pursue, virtually eliminated their civil rights, and controlled the entry of new blacks into the state.  Aiding runaway slaves was a felony under the Codes, and authorities could expel any African American who could not maintain an income.  Although first an all-black community, by 1837 five white men moved to Brooklyn and platted land, which they sold to other incoming white settlers.  They and the newcomers dominated the town politically since African Americans in Illinois were not allowed to vote.

Brooklyn was incorporated in 1873, but it wasn’t until 13 years later that black voters, as the majority of the local electorate, regained political control of the town.  In 1891 they adopted the new name of Lovejoy, after the murdered abolitionist Elijah J. Lovejoy, to distinguish it from a neighboring mostly-white town also named Brooklyn.

Lovejoy did not enjoy much growth or prosperity in the 20th Century, and it lost many of its residents.  Today, however, long-time residents, with the help of University of Illinois archaeologists and historians, are attempting to restore the original town and publicize its remarkable story.