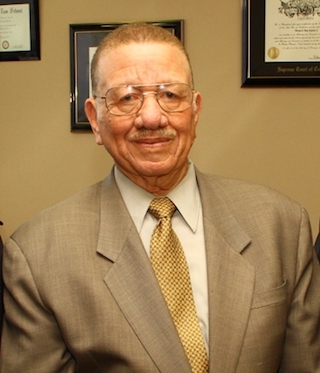 Police officer, attorney, and judge Earl C. Broady Sr. was born in Los Angeles, California, to Wiley T. Broady and Lillie A. Broady on December  24, 1904. He became a janitor at age thirteen and worked several years to help his family. After graduating from Jefferson High School in Los Angeles, he organized a dance orchestra. For six years, he delivered mail during the day and led his band at night.

Broady joined the Los Angeles Police Department (LAPD) in 1929. He was appointed acting sergeant in 1936. Four years later, he became a lieutenant, one of the first African Americans to hold this rank. He served as watch commander in charge of the entire shift at the Newton station.

In April 1962, several white policemen raided Muhammad Temple 27, killed one black Muslim, wounded several others, and arrested fourteen of them. Broady and civil rights attorney Loren Miller defended the Muslim prisoners before an all-white jury in 1963. One was let go because the jury failed to agree, two were found not guilty, and eleven were convicted for resisting arrest.

The law firm of Broady Scarlett and Roberson became the most prestigious black law office in California. In December 1964, Broady started serving as chief deputy for the Los Angeles County district attorney, the first African American to hold this position. In June 1965, Governor Edmund G. “Pat” Brown appointed him to the Los Angeles County Superior Court. Two months later, riots broke out in the Watts district of Los Angeles. Governor Brown placed Broady on the McCone Commission charged with discovering the causes of the rioting. It documented economic and social deprivation suffered by Watts residents; recommended a large increase in public spending on jobs, transportation, and schools; and called for an expansion of the LAPD’s community relations program.

Broady presided over several well-known trials in the 1970s, including that of Vaughn Orrin Greenwood who was convicted in 1976 of the throat-slashing murders of nine transients in downtown Los Angeles between 1974 and 1975. Broady retired from the bench in 1978. One year later, the Brotherhood Crusade chose him as one of the Pioneers of Black Legal Leadership. It honored him with their annual award “for providing unparalleled leadership in fighting for true and equal justice under the law.”

Earl C. Broady Sr. died in Beverly Hills, California, in 1992, at the age of eighty-eight. He was survived by his wife, Anna, a daughter and a son.