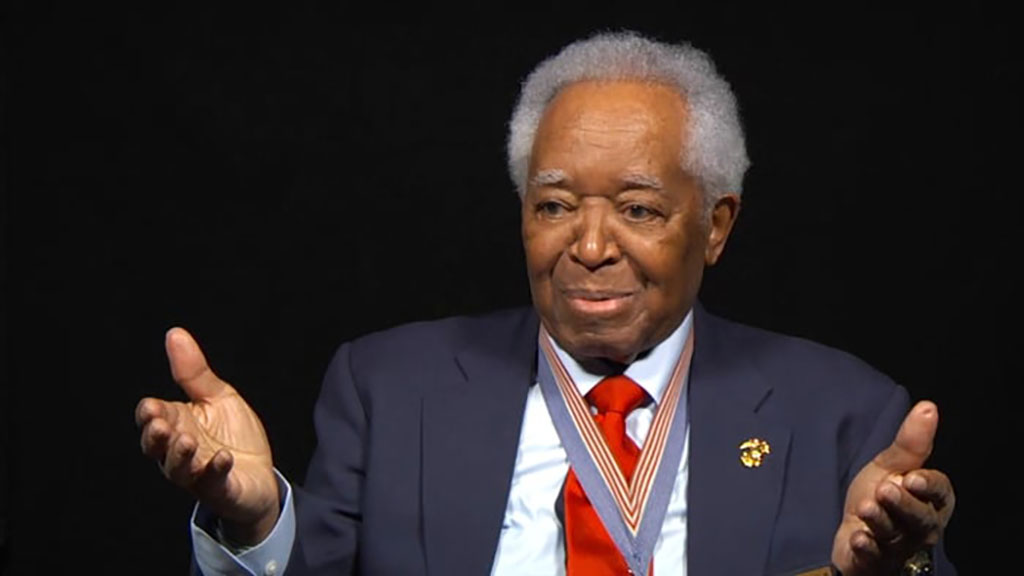 Ambassador Theodore Roosevelt Britton, Jr. was born on October 17, 1925 in North Augusta, South Carolina. In 1936, he and his family migrated to New York City, New York. Britton was drafted into the U.S. Marine Corps out of high school soon after the attack on Pearl Harbor. Although he was unaware at the time, Britton had been one of the first African Americans selected to join the U.S. Marine Corps. From its founding in 1775, the Corps was the only branch of U.S. military service that had always excluded African Americans.

Although the Marines now accepted African Americans, they were to be trained in a segregated facility located at Montford Point, North Carolina, adjacent to Camp Lejeune.  For the remainder of World War II all black Marines were trained at Montford Point.

In 1946, after his discharge from the Marine Corps, Britton returned to New York City and enrolled in New York University (NYU) under the provisions of the G.I. Bill.  He majored in banking and finance.  Britton’s studies were interrupted after he was called back into active duty for the Korean War in 1950. After completing his service in the Marines in 1951, he resumed his studies at NYU and graduated in 1952 with a Bachelor of Arts degree.

From 1952 to 1964 Britton worked as a financial services officer with Carver Federal Savings and Loan Association which at the time was the largest black-owned savings and loan association in the nation.  From 1964 to 1971 Britton worked with the National Baptist Convention leading their effort to encourage home ownership in the United States and in selected nations overseas.

In 1971 Britton was named the Deputy Assistant Secretary for Research and Technology for the U.S. Department of Housing and Urban Development (HUD) in the Richard Nixon Administration. While at HUD, his duties included managing finance and international research.

On November 17, 1974, President Gerald Ford nominated Britton to serve as U.S. Ambassador to the island nations of Barbados and Grenada.  The U.S. Senate confirmed his appointment on December 9 and Britton arrived in Bridgetown, the capital of Barbados, on February 25, 1975.  Additionally, Britton was tasked with simultaneously serving as the U.S. Special Representative to the small West Indian island nations of Antigua, Dominica, St. Christopher, Nevis, Anguilla, St. Vincent, and St. Lucia. Britton served as ambassador until April 22, 1977.

In 1981 President Ronald Reagan appointed Ambassador Britton to serve as chairman of the U.S.-China–Soviet Union Agreement on Housing and Planning.  He held that position from 1981 to 1989.  During this period Britton also traveled to over 150 countries as a lecturer, promoting international awareness and education.  Ambassador Britton retired from the U.S. Foreign Service in 1989.

Since 2000 Ambassador Britton has been regarded as the “Ambassador for Peace” of the South Korean-based Universal Peace Federation.  In 2006 he was named as Honorary Consul General for the Republic of Albania and the following year he was a member of its Middle East Peace Initiative to Israel and Palestine.

Britton has been honored with numerous accolades from several organizations. One of the most important came on June 27, 2012, when 86-year-old Ambassador Britton was awarded the Congressional Gold Medal, along with the other surviving Montford Point black Marines, for his service and bravery during World War II. Britton was not only recognized for serving in World War II but for fighting for equal treatment in a racially segregated U.S. military.

Theodore Roosevelt Britton Jr. is a life member of the Second Marine Division, Montford Point Marine Association, and the Association for Former Intelligence Officers. He currently resides in Atlanta, Georgia with his wife, Vernell.